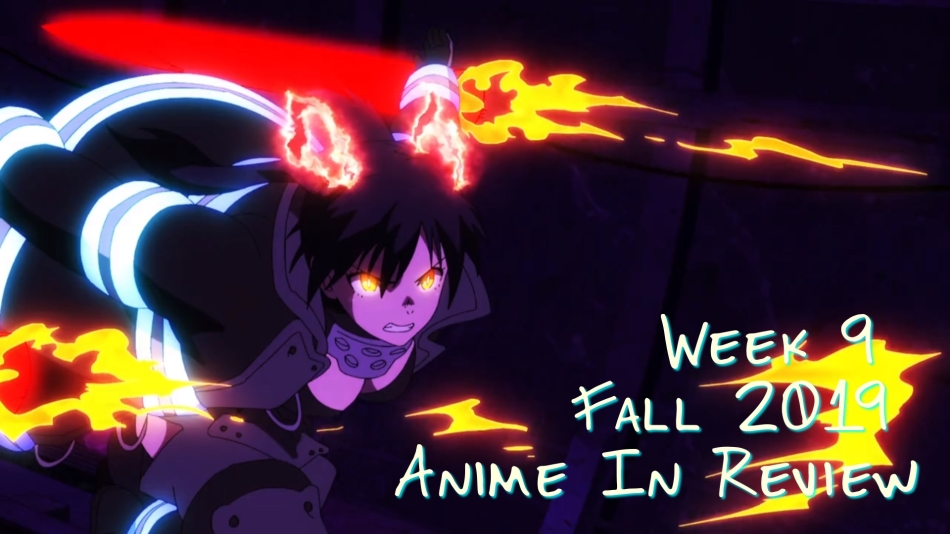 (Please note, there are no images because I had to rush this post out, apologies in advance–I may fix this at a later date).

All the seasonal anime I watched in the eighth week of Fall 2019!

Psycho Pass continues to dip in overall quality but is still a visually impressive and dramatic experience, my full thoughts can be found in my collaborative review on I Drink And Watch Anime dot com.

Didn’t I Say To Make My Abilities Average In The Next Life?! – Episode 8

Had this series started as a run-of-the-mill fantasy-action isekai, having yet another episode that explores dramatic subject matter and complex backstories might have seemed like a logical and necessary aspect of the show. But for a series like this that started as legitimately and consistently hilarious and self-aware comedy spend so much time with needlessly cruel throwaway villains and drama-for-the-sake-of-drama plot developments feels honestly a bit lazy. Sure there’s still some wonderful character moments and the occasional glimmer of brilliance with some laugh-out-loud gags, but I have to wonder if we’ll ever get back to the light-hearted subversiveness that made the first few episodes such a genuine treat.

This episode felt like an episode of CSI: Miami and your better believe I mean that as a compliment! Its lurid, glossy, dumb and entertaining in all the right ways and had considerable dramatic stakes amidst some genuinely funny moments, decent twists and a truly despicable villain. Great stuff all round, hopefully the show can continue at this level of quality going forward!

If ever there was a show to ‘un-jump the shark’ then this should be the poster boy. For all of last week’s absurdities this week entirely course corrects by delivering compelling action, adventure as well as significantly forwarding the plot into thoroughly interesting territory–and that’s just the first half of the episode! The second half ratchets up the fan-service and shenanigans to remind us of this shows roots while simultaneously leaving us wanting more of this honestly unique isekai!

My favourite part of this episode was the extended sequence showcasing our new addition to the cast, Emilia, re-inventing the childhood school-yard game of ‘Daruma Doll Fell Down’ or ‘Red Light, Green Light’ as its known in the West–seeing how a tried and true and pretty simplistic game could be transformed with just a few rule tweaks and gameplay reward mechanics was downright inspiring. The rest of the episode was more or less what we’ve come to expect from this series; i.e. cute girls playing board games.

The overall animation quality in this episode took a noticeable hit but thankfully only in the first half, as the second half made way for full blown beach episode shenanigans–and while not up to this show’s highest fan-service standards there was still a bevvy of scantily clad girls to behold as well as all the light-hearted service these episodes deliver. But it wasn’t all just eye candy as we also learned the identity of a traitor amidst the E-rank girls which added an extra layer of intrigue and drama to the proceedings.

The Hero Is Overpowered but Overly Cautious – Episode 8

The first half of this episode was honestly a comedic masterpiece, with so much attention devoted to upping the ante and subverting expectations in all the right ways–delivering joke after joke–set piece after set piece and delivering so many wonderfully quotable lines and memorable visuals. Where it dips perhaps is when the action takes the centre-stage, in the second half although to be honest the second-half was pretty damn great too, if slightly predictable.

Val x Love finally hits its stride (it only took 9 damn episodes) by becoming a fan-service classic on equal par with some of the all-time greats starting with a girl on girl shenanigan fuelled train groping scene followed up by an extensive bath sequence and an introduction to yet another girl for Takuma’s burgeoning harem. The only thing stopping this from ‘true classic’ status is the fact that we’re still pretty heavily censored but I’m still holding out hope for all the glory to be revealed in an uncensored blu-ray. Until then this episode remains, consistently entertaining, hilarious at times, and still very sexy even with all those pesky fog clouds!

With the cliffhanger announcement that came with the previous episode, that Director Nakiri would be taking over as the judge of the Team Shokugeki’s–the true narrative reason behind that decision showed itself in the subsequent episode, namely that the previous judging panel of two men and one woman would become one man and three women in what can only be seen as an effort to triple the parody–which honestly isn’t almost a bad thing because both are equally entertaining. Time will tell if this is the beginning of the end or just the beginning of something different…

This episode was an action-packed spectacle, while also showing that this series has its heart in the right place. The only thing detracting from it was some soft animation and line work that made some faster shots look borderline unfinished, but everything else was intense, exciting and high stakes excellence.

While it certainly feels like this particular arc is taking a long time to get properly started, I can’t help but be impressed with the amount of tension it manages to wring from what is mostly, yet another preparation episode–sure when the action finally does kick off towards the end of the episode there’s a sense of release–but there’s still obviously a long ways off from this arc being completed and from Eri being rescued.

How do you defeat an ego-maniacal goddess? Enlist your own one of course! While the decision to ‘hire’ Ishtar by our heroes to fight Gorgon isn’t exactly unexpected what is unexpected is the way they go about–in an almost comically genius approach that satisfies both her ego and greed that’s especially funny if you know anything about the character of Rin from other ‘Fate’ series. What I think made this episode truly excellent though was the revelation that Ishtar and her host body cohabitate within her mind (in a 70/30 split in case you were wondering) and the quiet moments that come subsequently between Ritsuka and Ishtar that help humanise an otherwise larger than life character.

I mentioned last week that this show’s strongest suit was its comedy and once again it went and delivered big in the way with laughs with some of the most unexpected developments coming from otherwise throwaway gag lines. This episode entirely confirms that not only is their otaku-leaning teacher hot for her students but that she’s committed to take the “harem route” when it comes to courting them. Wasn’t this show supposed to be about rifle shooting?!

It’s interesting that, in an episode that could have been especially serious given its subject matter, that the show takes a more light-hearted approach to its presentation. Spoilers incoming, but it turns out that Furuhashi–who wants to study astronomy–despite her penchant for literature and the arts–is actually the daughter of not one but two mathematics geniuses. But when her mother died, her father was left an empty shell of a man who neglected his daughter and her interests in mathematics–even going as far as striking her for even bringing up the subject in his presence. And undeniably this is heavy subject matter but because of Furuhashi’s determined and upbeat personality it doesn’t seem to affect her as much as it should–which might seem like a failing in the shows representative tone but if anything only highlights how much Furuhashi has had to repress in order to continue as a functioning person. The second part of this episode will be the ‘make or break’ moment in this character arc and whether the show has the chops to execute the dramatic potential of this storyline.

And here we have the first 100/100 episode of the Fall 2019 anime season because honestly there isn’t a single thing about this episode I would change, from the ‘calm before the storm’ opening minutes to the pre-Nether parts which were the perfect blend of comedy and tension–this episode went in directions I didn’t expect and were all the stronger for it. Though it should be no surprise that the best parts of the episode were the pair of fight scenes featuring our strong female characters–both unique, action-packed and empowering in their own separate ways. If there’s honestly anyone still out there who thinks this show is sexist then they are beyond delusional at this point. An amazing episode from beginning to end!