Week 12 has come and gone, and with it a bunch of shows having their season finale! Let’s not waste any time and get straight to it!

If It’s For My Daughter, I’d Even Defeat The Demon Lord – Episode 12 (Finale)

I probably built up my expectations too much for this episode because it was a rather standard episode of the show and didn’t really offer anything groundbreaking in the way of character development nor moving the ‘relationship’ between Latina and Dale forward. If this show gets a second season I can see how this episode might be more necessary as it lays a lot of emotional groundwork for Latina’s feelings towards Dale but if it doesn’t get a second season then it kind of fell a little flat as far as a ‘finale’ goes.

While this was a surprisingly emotionally satisfying ‘conclusion’ of sorts I did take issue with one part of the episode and probably not for the reason other people did. Spoilers incoming, Homare and Shion are on the raft returning to the island and facing serious dehydration, with their only source of water being contaminated water that would probably kill them if they drank it orally Homare insists they ingest it through the anus so as to get hydrated without getting sick. Fair enough, but the way they do it is by tonguing the liquid into each other assholes. Subversive content is one of my favourite things in anime and so the action itself doesn’t bother me at all but the fact of the matter is they had PET bottles that were holding the liquid, why couldn’t they have used them to more effectively ‘deliver’ the liquids into their bodies? This show prides itself on its realism when it comes to survival advice but this felt kinda dumb. 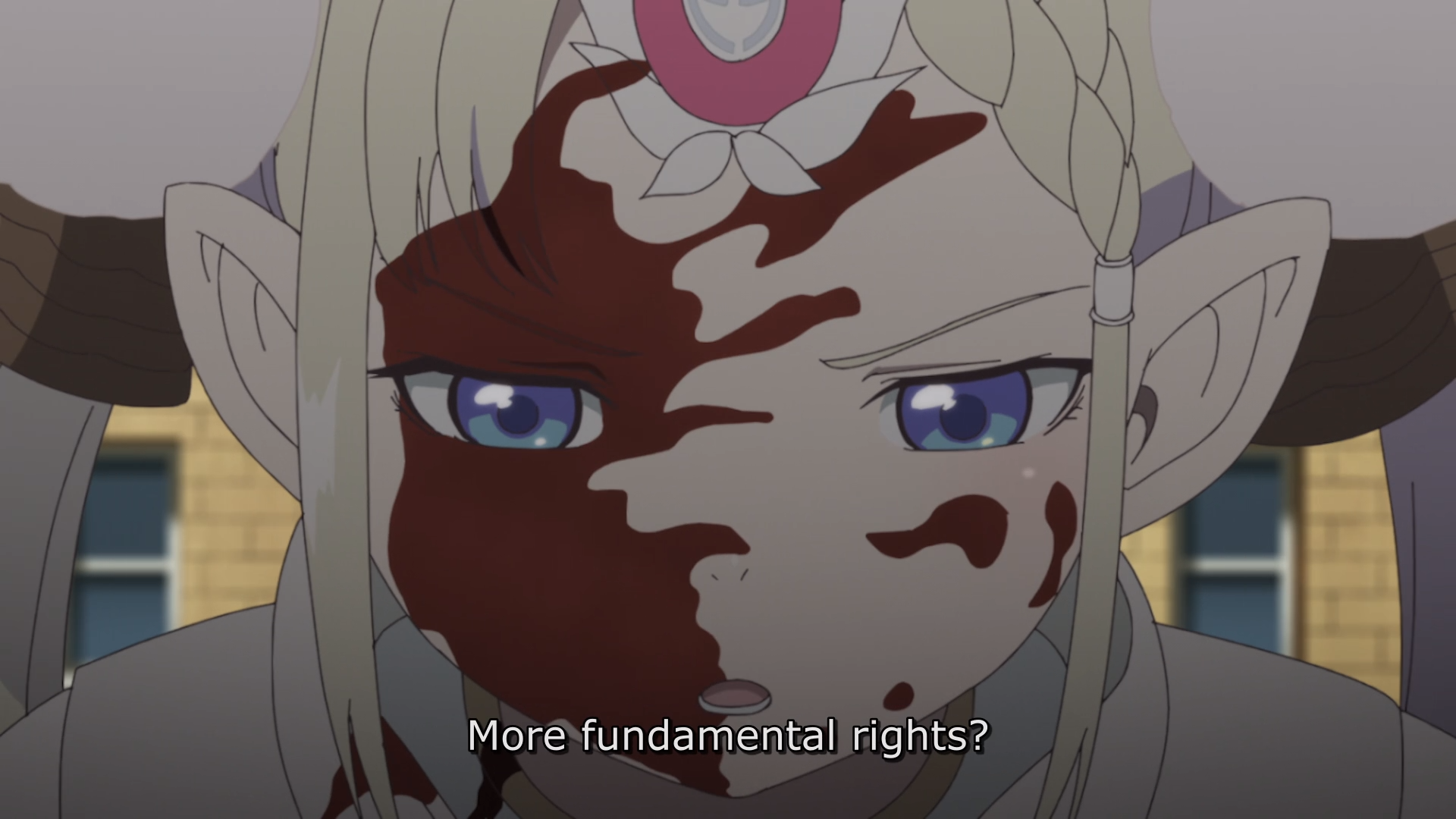 As much as I hate to mention it (because it doesn’t usually factor at all into my scoring of an episode) the production values took a bit of a hit this week, which was expected since it was delayed for those very reasons the previous week but it’s something to consider all the same. As for the actual plot of the episode things are moving along pretty quickly and the whole ‘racism’ aspect of this particular arc remains the most interesting thing about it.

Do You Love Your Mom And Her Two-Hit Multi-Target Attacks? – Episode 11

There’s plenty of good in this episode (namely most of our female cast appearing in their lingerie) but the antics of the mothers are still a bit one-note. Thankfully though their part in the arc is resolved towards the end of the episode and in a way that was emotionally satisfying (even if I didn’t at all care about the characters involved) leaving us with plenty of room for a final showdown next episode!

‘Magical Sempai’ ended its run with two of its strongest episodes with both the comedy and the fan-service hitting all the right notes as well as some surprisingly endearing character moments. This show has definitely left me wanting more!

Is It Wrong To Try And Pick Up Girls In A Dungeon? II – Episode 11

Things take a turn for the more light-hearted and comedic with this final arc of the season and while I’m certainly no opponent of levity in any show and it is undoubtedly a funny episode I can’t help but think the penultimate episode of a series that’s had so many strong character and narrative moments deserves a more ‘epic’ conclusion. That said, I absolutely loved the few moments that dealt with all the different kinds of relationships between mortals and deities and if the focus of the final episode is more on that than goofy kidnapping plots then it’ll be all good.

One of my absolute favourite things about this finale is just how absurd it is that a fantasy isekai series has its ‘antagonist’ defeated by our protagonist demon lord by showing her the pleasures of hot springs. Also the fact that this episode is like 99% talking and has the gall to end on a cliffhanger too (and a pretty intriguing and hilarious one too) makes me just love this series all the more. This show was so unexpectedly off-kilter and haphazard and the final episode is just an embodiment of that too.

YU-NO: A Girl Who Chants Love At The Bound Of This World – Episode 24

Its exposition overload in this episode as Takuya and the others get pretty much everything explained to them over the course of more than half the episode. And while that probably sounds boring and lazy (you know, the whole ‘show don’t tell’ criticism) I honestly think it works. A part of why it works so well is just how compelling it is, how easy and satisfying the pieces fit into place and how the information is imparted by two different people, to two different groups simultaneously, cutting between the two just enough to make it feel like it’s more action-packed than it really is. Just damn good anime exposition in a nutshell.

Given how strong some of the later episodes of ‘Fruits Basket’ have been it’s kind of expected that its season finale would be something of a quieter affair, that’s not to say it’s an episode without emotion or interesting character and plot moments–the scene early on with Kyo confronting his Shisho was excellent for example–but this episode feels like its more keeping things warm until events can truly escalate in the upcoming second season.

The opening minutes of this episode was all sorts of adorable and hilarious but with a necessary bittersweet edge. The rest of the episode—while entertaining—didn’t carry the same kind of urgency or intrigue that I was hoping for. Nor did it really ‘end’ at all, which makes sense as there’s a movie continuation slated for next year but it kinda felt like they were holding off a bit too much in order to save big events for the aforementioned movie.

There was really only two ways this show could take a season finale considering this show has two modes; sincere or silly. And while I kinda prefer this show when it’s being sincere (it had a couple of episodes doing that–both of which were season highlights) our finale firmly landed in ‘silly’ territory and while it’s not as memorable because of it it’s at the very least frequently hilarious and expectedly ridiculous. I’m going to miss these girls…

Much as I love ‘Arifureta’ I have to be honest and say this episode had some problems–nothing egregious as to ruin an episode of course, but problems all the same. And most of them came from the editing which felt hurried and made scenes more confusing than they needed to be. That said the action was a lot of ridiculous fun, the character interactions were flawless (as has come to be expected) and the story is progressing along in a compelling manner.

How Heavy Are The Dumbbells You Lift? – Episode 12 (Finale)

I complained about Episode 4’s truncated beach episode in my seasonal review of it but the show makes up for it by giving us another beach episode and it being not only more sexy but also a lot more entertaining all round. And aside from the shenanigans involved in the talent show which are a lot of fun, the episode surprises by giving us a touching ending and a very interesting insert song.

Hensuki: Are you willing to fall in love with a pervert, as long as she’s a cutie? – Episode 11

Well as far as “saw that coming” moments this episode delivered to expectations by (lots of spoilers for the rest of the episode incoming) revealing that Keiki’s ‘Cinderella’ was his younger sister all along but despite this revelation being something of a foregone conclusion this episode still managed to awe and surprise by not only having their relationship be that of a non-blood relation (it’s cliche but it was delivered in a fun way) but also by the two of them sharing a kiss which felt like a much needed escalation in activities given what’s come in the show so far. All the pieces are in place for next week’s finale to be a truly dramatic episode… or just entirely unresolved, either is possible at this point.

The Demon Girl Next Door – Episode 11

Say what you want about ‘dream episodes’ but I personally love them and this episode is no different. Surreal imagery, nonsensical logic, personal comedy and deep revelations it’s all here and it’s all fantastic. And what’s not in the dream, the comedic misunderstanding at Yuuko’s front door and the ensuing plot revelation delivered by her mother that’s both deep and surprising and adds a lot of depth to the overall story going into the finale.

Last week, ‘O Maidens’ fumbled its near flawless run of episodes by almost “jumping the shark” in search of higher stakes and fever-pitch drama, and while I don’t think this episode justifies the overall silliness of the ‘siege‘ ploy that ended the previous episode it at least manages to back up its actions with serious introspective character development and emotionally charged moments for all of our characters which is all I ever wanted from this show anyway. I’m glad the show ended strongly and more in line with what came from the show at its height.

This episode gives us a flashback to the formation of Fire Company 8 as well as a bit of backstory for Obi, Hinawa and Maki. It’s specifically Hinawa who benefits from the time spent delving into his past as the straight-laced, by-the-books lieutenant is stripped back to reveal the tragedy he endured in the military and how it shaped him as a person. Everything else is just the high quality content we’ve come to expect from the series to this point so there’s not really much else to add.

Much as I love this show (Takagi specifically) I can’t say I ever expected an episode of this show to be my favourite of any given week, that alone should be proof enough of the sheer power of this episode. And it’s kind of hard to put into words what makes this episode so special but basically we’re afforded the first kind of real step into Nishikata realising his true feelings for Takagi but it’s how much it affects her that brought so many happy tears to my eyes. This Summer season of anime has brought a lot of tears to my eyes, but none felt as powerful or long-earned as seeing Takagi’s shaky smile as she accepted Nishikata’s nervous invitation to the summer festival. This show is truly a masterpiece in subtle but meaningful character moments.

And that’s Week 12 done with, sad to say goodbye to most of these shows but we’ve still got content to come as there’s still a couple of stragglers who aren’t ending ’til next week (and some even later). Absent from this week’s list is ‘Re:Stage! Dream Days’ which had the week off. Thanks for reading!