And here we are in Week 10! So close to the end of the season for so many shows! What follows are my reviews and scores for each of the seasonal anime I watched this week.

It’s weird to think this is episode 10 of this show, because not only are we treated to a very low-key, almost languid installment but likewise the series as it is now doesn’t really have any antagonist to speak of or any forward narrative drive. Ordinarily I wouldn’t care as the majority of anime I watch for the characters and not the plot but it still seems odd–then again, this show has proven to be an oddity all season so I don’t know why I should expect differently from this show now!

Last week I called this show “this seasons’ most consistent anime” and at the time that was accurate as the score’s hadn’t deviated more than two points episode to episode and yet here we are with a drop of eight points for Episode 9. Sure that’s by no means the biggest decline of a show this season (or even this week) but this is easily the weakest of ‘Re:Stage’s’ episodes thus far. The action takes a step back from the high-stakes world of idol contests and settles for a whole ‘mother doesn’t approve of character becoming an idol’ subplot that feels pretty contrived this late in the game. It’s still a fun episode and there’s some good character moments but it’s still a shame they went for such a lazy story device and wrap it up just as quickly as it comes up.

If It’s For My Daughter, I’d Even Defeat The Demon Lord – Episode 10

More of the same means not much of consequence to talk about, this show is still entertaining and enjoyable if nothing remarkable. Though I did like the fact that Latina was “officially” welcomed into the Teathrow clan as it made this whole arc mean a lot more considering where the story is inevitably heading (no spoilers!).

This episode felt a lot like earlier episodes, hence the dramatic drop in the rankings, that’s not to say that the early episodes were bad or anything just flawed and occasionally annoying. With the focus back on the boys and their relationship with Tohru didn’t exactly make for the most compelling of times–that said, the hints at developing the relationship and backstory between Kyo and Kagura suggests something more dramatic and narratively rich to come.

Beach episode! And as far as beach episodes go it hit all the predictable–but nonetheless enjoyable–tropes that it needed to, balancing the fun and the fan service with ease. Inserting Madara-san into the mix however was an inspired decision on the show’s front as I feel she’s an invaluable part of the cast, though one who has been sadly underutilised so far.

Just when things were starting to get comfortable (or about as comfortable as living on a deserted island could be) for the girls the episode ends with Shion getting washed out to sea on a raft amping up the drama and stakes considerably. Everything else about the episode is the usual solid quality entertainment so there’s not much else to say!

YU-NO: A Girl Who Chants Love At The Bound Of This World – Episode 22

A lot of moments in this episode felt like the previous episode repeated for the sake of padding out the story and then there were also a lot of positively inspired and downright tear-jerking moments which elevated the material beyond. Also, Kunkun is best anime girl ever even though she’s [redacted] now. Damn it, show, why do you put me through this emotional torture!

The first half of the episode wraps up the events of last week’s more light-hearted shenanigans in a satisfying way and introduces us to a brand new arc that ups the ante considerably and brings the whole ‘racism’ aspect between the Earthlings and other-worlders–which had only just been touched upon–to a head. The writing feels especially strong in this new arc (a scene where Kei schools a racist police officer on the route of his racism is a particularly strong point) and will hopefully continue to grow from strength to strength in coming episodes.

How Heavy Are The Dumbbells You Lift? – Episode 10

Things have balanced out and more or less returned to ‘normal’ after last week’s season-low episode. The Christmas Party portion of the episode was predictable but a lot of fun, while the second-half dealing with Akemi and Machio’s “date” at a parody version of Tokyo Disneyland has undoubtedly the highlight as it was quirky, irreverent and borderline ridiculous.

Hensuki: Are you willing to fall in love with a pervert, as long as she’s a cutie? – Episode 9

There were a lot of unexpected moments in this episode that helped elevate beyond its peers this week and while none of them earth-shattering in gravitas they added a certain realism and honesty to the events which cannot be understated.

After what seems like an eternity of episodes focused on the various supporting characters of this show we finally get an episode more centered on our main three girls–which ends up being something of a mixed blessing as the content is both comedically focused but also somewhat repetitive. That said, the big laughs in this episode more than make up for the repeated content and likewise the few scenes of our side characters feel all the more impactful for their brevity. Also, the post credits rap sequence from ‘Yamai’ is all kinds of inspired…

The thing that was so surprising and endearing about this episode was seeing Takagi-san in a different light than we’d ever seen her previously, that being worried, distracted and contemplative and even though it was for just one of the episode’s four segments it really hit home as did Nishikita’s simple but meaningful gesture to cheer her up. The final segment though, felt especially intimate and modern in a way that I feel like this show should have been all along–that’s not a complaint as such, just an observation.

Do You Love Your Mom And Her Two-Hit Multi-Target Attacks? – Episode 9

We’re barely an episode away from the previous arc and already things have picked up considerably–indeed with the focus away from stale schoolyard shenanigans and Medimama’s influence the show gets the breadth to shine again. This new arc concerns a certain tower which holds the power to grant wishes and while that’s interesting enough it’s made all the more entertaining by the fact that we’re introduced to a klutzy ‘anti-mom’ girl who steals the show and an overall relaxed vibe that even has our protagonists shopping in a WalMart style superstore. Is this review confusing? Congratulations, so is this show, but I still love it all the same!

Is It Wrong To Try And Pick Up Girls In A Dungeon? II – Episode 9

There’s something about this episode that was slightly disappointing compared to the previous ones in this particular arc, while it’s still building in a satisfying way towards its conclusion and contains action and drama and character development it was more than a bit annoying to find out that Ishtar, the main antagonist’s sole motivating factor for wanting to take down the Freya familiar is because she’s mad that people think she is more attractive than her. For all the good writing this arc has contained with regards to its female characters, painting these prostitutes in various moral shades rather than simple black and white then having such a cliche and laughable motivation for the antagonist felt kind of cheap. That said there was so much good in this episode (Mokoto pretty much stole the show) that it’s almost something I can overlook–almost.

The Demon Girl Next Door – Episode 9

This show has always been high quality entertainment but this episode kind of felt like a lot of it coming together in a nice way and in a way a pure distillation of everything great about this series. Mikan–despite being a recent addition to the cast–has integrated herself so well into the show it’s like she was always there, which is no small feat to be sure!

It’s the moment (some) people have been waiting for—Hajime is reunited with his class, specifically his teacher and a couple of classmates who are working farming rice. The reason I added the qualifier “some” is because I don’t care about their portion of the story I’m only interested in Hajime and Yue and Shea’s journey not the story of any of his classmates. Thankfully the episode handles things well enough that I don’t hate everyone immediately (even though the teacher is nosy and annoying) and while the episode ends with them joining our trio I can hope they remain peripheral side characters and not intrude too much on the screen time of our main characters. 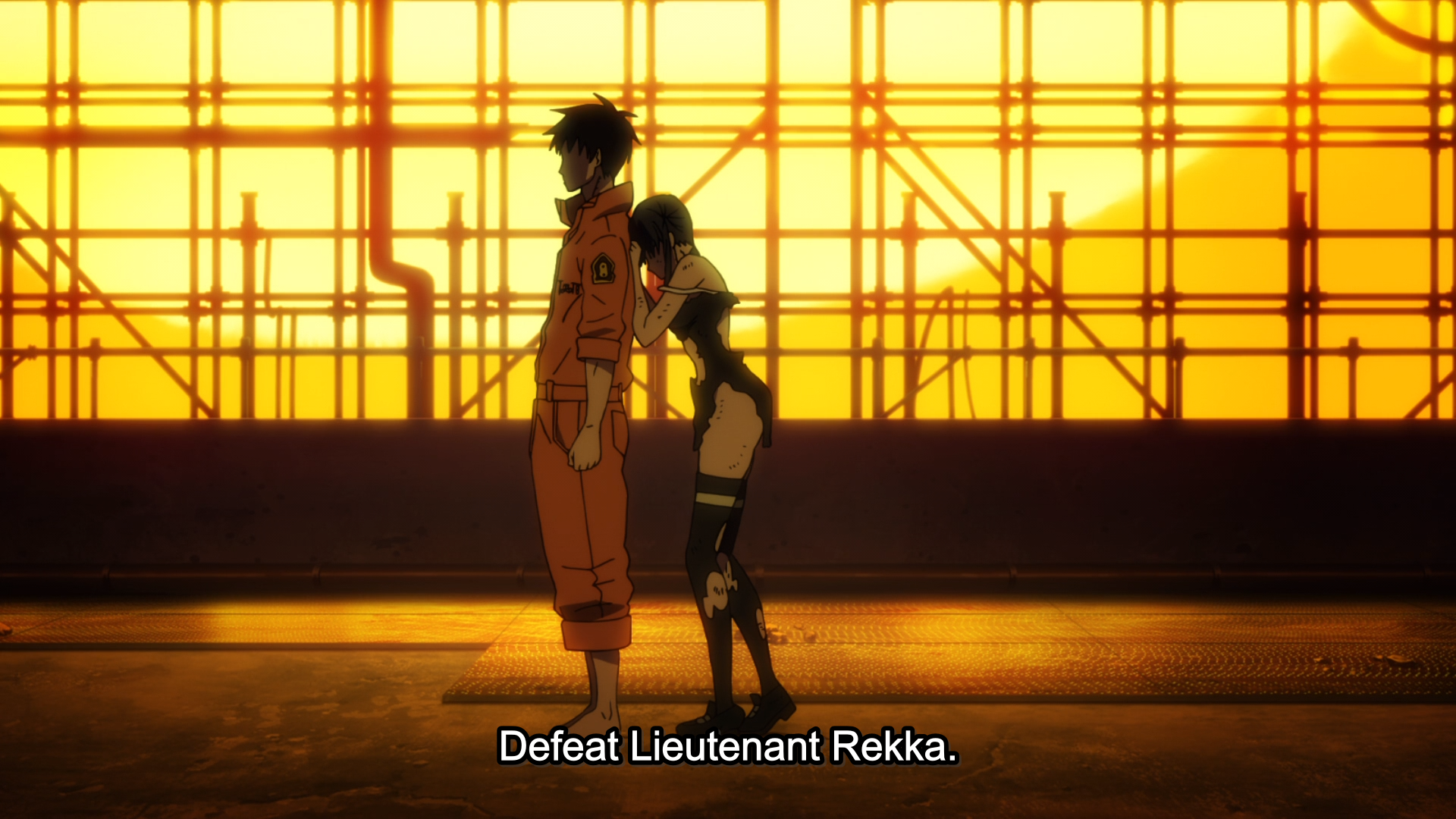 Another perfectly entertaining episode of ‘Fire Force’, though in some ways felt like it was just hurrying its way to the point in the story where Tamaki (finally) joins the 8th Company–not that I’m complaining as she’s my favourite character–but a lot of the consequences of Rekka’s actions seemed downplayed in comparison. 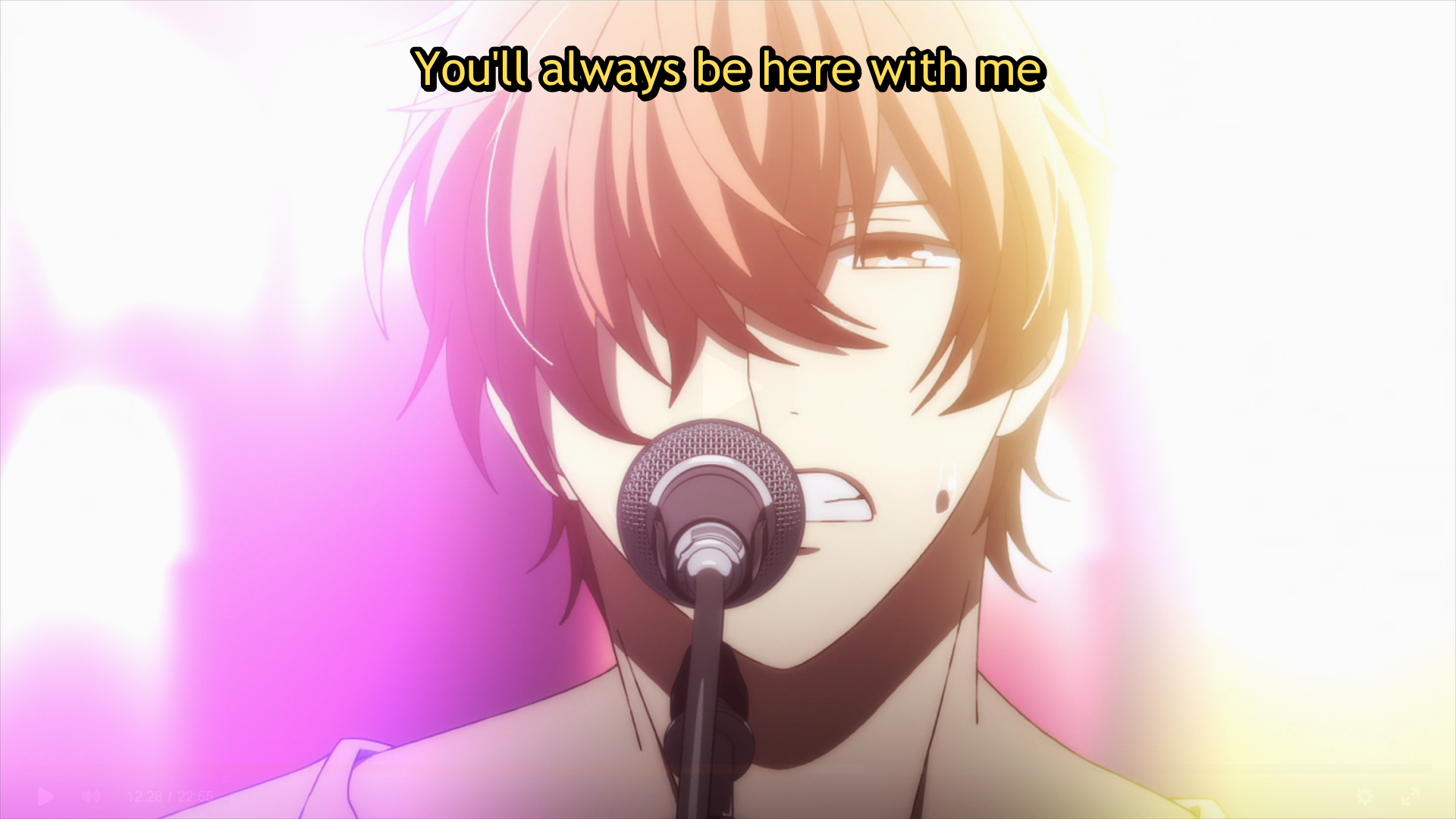 There was no surprise that an episode dealing with Mafuyu’s feelings for his deceased childhood friend and lover put to a song would be anything less than emotionally charged and powerful. What is surprising is just how well the whole episode comes together, bringing seemingly disparate moments from the previous 8 episodes together and elevating them into a meaningful and honestly devastatingly beautiful crescendo. Aside from the aforementioned song (which was pretty much a flawless couple of minutes of anime) the rest of the episode had such rich character moments for everyone in the main cast–and even some in the side–that it’s hard not to be impressed by it all.

The character drama hits an all time-high and unlike some previous episodes where certain character’s stories may have been sidelined in favour of others, everyone gets a substantial slice of the action here. Even Momoko, who’s had the slowest progress narratively gets a big character shake-up and while not unexpected it’s almost flawlessly executed and so painfully raw to behold. There’s really no stopping this show when it’s at the height of its powers (which is more often than not).

And that’s all the anime I watched in Week 10! Let me know what your best and worst of the week were and thanks for reading!