Week 8 has come and gone! What follows is a list of episodes of seasonal anime ranked from worst to best, their individual score (and the change in score from the previous episode) plus a little review of each. Let’s get started! 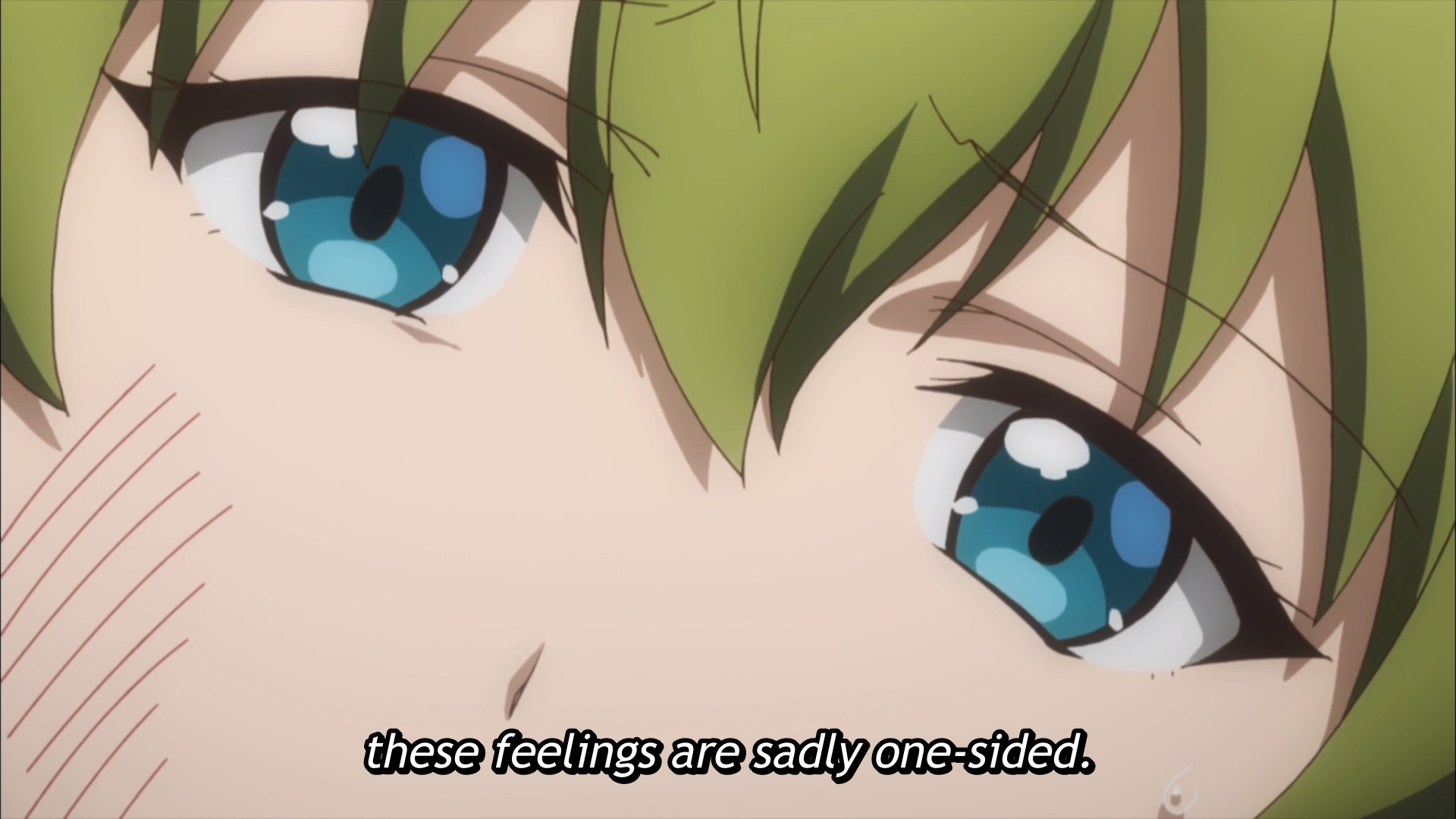 At this point the only thing stopping me from dropping this show is that the female characters are still enjoyable to watch. Though I think the writing is getting progressively worse (this is the lowest ranking episode of any anime I’ve watched this entire Summer season FYI), it relies too heavily on lazy story-telling and character tropes which sucks almost all the enjoyment out of an otherwise entertaining show. I’d go into it more but I really don’t care about this series anymore. Such a shame considering the potential it had early on…

If It’s For My Daughter, I’d Even Defeat The Demon Lord – Episode 8

The first half of the episode with Dale and Latina visiting some furry relatives felt pretty aimless and weird however the latter half with us finally reaching Dale’s hometown and meeting his immediate family was much more satisfying and entertaining especially the rapport between Dale and his parents–other than that it was more or less business as usual for this show.

More ‘business as usual’ anime here with the various parts of the episode varying in quality and comedy but on the whole still delivering an entertaining experience.

The slow but steady rise in overall quality of this show has reached its peak (so far) and yes, I officially think this show is “great” (as an 80 or higher score would imply). I’m still not sold on Mafuyu’s character or the overall portrayal but everyone else is great. The conversation between Uenoyama and Akihiko in front of the vending machine talking about their sexuality was honestly brilliant and even touching (I’d be willing to watch more ‘yaoi’ anime if these kinds of things were handled with such sensitivity and understanding), meanwhile the flashbacks to Akihiko’s first love were markedly more interesting than anything else that had happened in the show thus far.

Ordinarily I don’t get ~triggered~ by “gross-out” visuals, bodily fluids of any kind I have no problem with but for some reason the recurring ‘gag’ of barnacles growing on the inside of a bikini top made me so queasy that I almost couldn’t continue with the episode at several points. That’s the sole reason for the fact this show dropped in the rankings so much from the previous episode because otherwise it’s a funny and even kind of clever take on the ‘beach episode’ dynamics and even meta in a kind of way I didn’t expect. If the ‘bra barnacle’ visuals hadn’t been included I could have confidently given this an 87/100.

A lot of dangling plot points got satisfyingly resolved in this episode as well as the introduction of (even more) new characters and it made the episode all the more ‘complete’ feeling because of it.

Do You Love Your Mom And Her Two-Hit Multi-Target Attacks? – Episode 7

If you remember my previous reviews for this show, the Medhi and her mother arc hasn’t been as enjoyable as the previous ones and I was hoping that this 3rd episode would wrap it up but alas we’re treated to another cliffhanger ending meaning it’ll be stretched to (at least) a 4th episode. I’m not sure why this series felt the need to spend so much time on this arc as its resolution seems a lot more obvious than Wise’s (and that was wrapped up in about 3 episodes). That said, the school festival scenes were still fun and Mamako remains absolutely endearing in her ‘motherly-ness’.

How Heavy Are The Dumbbells You Lift? – Episode 8

The previous two episodes (and episode 6 in particular) were examples of this show at its full-force both creatively and comedically, so it’s somewhat of a shame to see this series fall into some predictability and cliches. Even the introduction of two new characters–in the form of two other school-teachers at Hibiki’s school–doesn’t offer that much in the way of either innovation or originality. If it seems like I’m being unfairly harsh on this show it’s just because of the disappointment considering the lofty highs of better instalments because it’s still a wonderfully funny and silly show otherwise.

Of all the things I’d expect to see from a show about girls surviving on a desert island one of the last things I’d expect was a damn hot springs episode! And what’s more it’s a surprisingly inventive, situationally appropriate and most importantly sexy and funny take on the hot springs episode formula. Also the running gag with Asuka diving into the sea only to nearly die was hilarious!

Hensuki: Are you willing to fall in love with a pervert, as long as she’s a cutie? – Episode 7

Considering the overall light-hearted comedic tone of this show thus far I didn’t expect an episode that had the amount of character depth that this one did and for the focus to be almost entirely be taken away from the protagonist for the sake of developing the ‘relationship’ between two side-characters. It’s a complete runaway success however as things inevitably fall back into routine by the closing minutes but it was still interesting to see a self-identifying lolicon side-character (who would otherwise be comic relief in a lesser series) get such time and attention within a show’s narrative.

YU-NO: A Girl Who Chants Love At The Bound Of This World – Episode 20

Where this episode succeeds is in its sheer dramatic weight and the unexpected turn of events that run through what can only be described as a series of increasingly tragic scenes for our protagonist. That said, it does get a little wearying by the end and the ‘faceless’ villains are especially one-dimensional and cruel as if to hammer home a plot point. Nevertheless YU-NO remains pretty damn compelling, well-written, voice-acted and overall executed despite the flaws.

For those familiar with me as an anime watcher I bet you’d expect me to be frothing at the mouth at the prospect of a busty genki scantily clad bunny-girl joining this show’s cast! And ordinarily you’d be 100% correct but here… I don’t know, while aesthetically Shea is pleasing addition to the show but I was already so sold on Hajime and Yue’s pairing that I didn’t need anything added to the mix. Maybe her over-the-top antics and high energy presence will bring a new dynamic to the team but right now I’m hoping she takes more of a back seat/supportive position in the journey to come.

The Demon Girl Next Door – Episode 7

Last week I commented that I was hopeful the big narrative development that occurred would “shake things up” and while not quite the earthquake I was expecting the episode still delivered enough tremors to the tried and tested formula.

An unexpectedly touching episode that amped up the character drama and reminded me of some of the best episodes of ‘Banana Fish’ (that might seem like an odd comparison but I feel like the shows at least share a lot of similar thematic sensibilities). This is a season high for this show and I hope it continues along these lines as it’s proving itself to be a terrific experience overall.

I love the character of Saki Hanajima so having an entire episode devoted to her dark “wave” shenanigans is pretty much a dream come true. There’s a wonderful comedic through-line that permeates this whole experience and while the episode itself is pretty predictable (especially with regard to its conclusion) it’s also a whole lot of fun!

So here’s the thing, this episode contains probably my favourite moment of this entire week of seasonal anime–and it lasts literally 5 seconds. The rest of the episode is more-or-less what we’ve come to expect from this show and so I’m left in the difficult position of reviewing a single ‘blink-and-you’ll-miss-it’ moment versus the other 23 minutes of the episode. Simply put this episode is still a wonderful moment but its the overall experience (and I mean that as a fan from the beginning) that makes the in-between moments all the more wonderful.

The ~drama~ was ratcheted up to 11 in this episode and in any other show it might have seemed contrived or cliche but I feel like in a show that’s otherwise ostensibly a CGDCT show having so much character development and tension and drama just makes it feel all the more unique and satisfying. And (mild spoilers incoming) the fact that KiRaRe managed to perform, do so flawlessly and pull it off within the confines of the narrative and technically speaking (their big performance is 2D animated–like the show itself–and looks gorgeous for it) was the icing on the proverbial cake.

Is It Wrong To Try And Pick Up Girls In A Dungeon? II – Episode 7

Continuing on from the events of last week’s excellent episode as well as broadening the mythos and mystique behind the Ishtar familia, there’s a palpable sense of tension to the proceedings (as well as the requisite humour and character development). But it’s the scenes around Haruhime that show the greatest shine as the writing is particularly nuanced and compelling with regards to her status as a prostitute and what that means when it comes to their relationships with heroes in both the legends of old and the real world they live in.

While Hibana’s move from the ‘dark side’ over to the good guys may have felt fast (though not unearned) it at least serves a greater purpose both narratively and comedically as she spends a fair chunk of time on the screen in the first half of the episode and it’s all the more fun for it. The new arc begins proper in the second-half as Shinra, Arthur and some other lads go undercover in Company 1 to see if they are the ones responsible for creating infernals. There’s some terrifically fun sparring (both physical and verbal) and Company 1’s Captain Leonard Burns shows just how terrifyingly strong of an antagonist he might (probably will) end up becoming as he takes on Shinra’s full force and barely suffers a singe. It’s all enticing and dynamic groundwork for things to come.

So many story threads come together in such a satisfying emotional way in this episode that were it not for some other characters being sidelined a bit this could very well function as a season finale! Thankfully we’ve still got four episodes left of this wonderful show but Kazusa and Rika’s (the latter in particular) respective journeys are given such heart-warming and tear-jerking pay-offs that it’s almost hard to fault the episode. Even the characters who aren’t nearing the end of their emotional character arcs like Hongo, Momoka and even Niina are given important scenes that seek to pave the way for more drama to come!

And that’s all the anime I watched in Week 8! Let me know what your best and worst of the week were and thanks for reading!