What’s the show? To Love-Ru Episode 1.

So tell me about this show you’ve decided to commit 2 years of your life reviewing every single episode (because that’s how long its going to take)? Wow, straight in their with the big questions, huh?

I mean nows a good a time as any, is it not? Sure. I mean, I love everything about this show and if you care to follow me over the next two years you’ll find out exactly why. What follows is an absolutely biased look at a series I’ve deified in my mind for about a year now so don’t go expecting nuanced critique–but likewise expect a lot of references to things that have yet to happen in the series. In other words, this is pretty much for fans of the series only. Or those who don’t mind spoilers for future episodes.

But it’s an ecchi series, how many spoilers can it contain anyway?! I thought this too, until I sat down to watch Episode 1 again for the first time in… maybe like 9 months? Either way, To Love-Ru’s first episode is an impressive piece of art that’s almost hard to quantify and even harder to compare against the rest of the series that is to come.

And why’s that? Because Episode 1 is emblematic of everything that made this series inherently bingeable in the first place, it’s fast paced and frenetic and fun and… not really anything like the other subsequent 3 seasons of To Love-Ru that come after.

Okay, I think you’re getting ahead of yourself. Let’s just focus on this episode and this season, yeah? Fair point. So the series starts with Lala, in space, in her spaceship being pursued by a convoy of “attackers” insistent on reclaiming her. And already a more action heavy tone is being set to a series which will ostensibly become an Earth bound, slice of life centric ecchi.

What did I say about reviewing this episode, not what’s to come?! Sorry. I’ll try and restrain myself on that part.

Sure sure, so what happens next? Well to cut a long story short, Lala’s spaceship crashes into the school of our male protagonist Rito Yuuki–who himself is already preoccupied with courting the girl of his dream, classmate Haruna Sairenji. A wholesome, very good-girl who you should probably not get too attached to if you intend to follow this series unto its fruition…

Please. Please stop with the not so subtle future spoilers, it’s doing me a harm. Okay, I promise that’s the last time! (Spoilers; it’s not the last time).

Okay so what happens next then. So after another failed attempt for Rito confessing his feelings for Haruna he returns home to lick his wounds when his peaceful bathtime is interrupted by Lala’s sudden (naked) appearance in front of him. From here things quickly progress as Lala introduces herself, her robotic costume maker ‘Peke’ and her general situation which basically amounts to the fact that she’s a teenage runaway who’s sick of being told who she should marry by her father. In short; Lala is an alien princess and genius inventor who is somewhat indifferent to the human race but she’s put her trust in a “bland” human because he was too much of a ‘good guy’ to let her get captured by the royal guards of her home planet–shenanigans ensue.

“Shenanigans” Why do I get the feeling I’m not going to like where this is going? I don’t know what you’re inferring, sir…

Don’t play dumb with me, I can literally scroll down the page and see you have a segment of this review called “The Fanservice Review”… While I’ll go to my grave defending how good the characterisation is in this series, I fully admit that the majority of people who clicked this review are just here for ~dem anime tiddies~ and yeah, that’s where this review will soon pivot. But I’m not quite done yet.

Okay what happens next? Well Rito is walking to school the next morning, lamenting having intervened with Lala when Haruna approaches him, she wants to talk about what he was doing running across the roof with a strange girl last night (she caught a glimpse of him while walking her dog) but he interrupts taking this as the opportunity to confess his feelings for her. He pours out his feelings, all the while bowing his head only for Lala to have appeared between the two of them. Lala misunderstands and thinks he’s talking to her and reciprocates his feelings, further upping the ante by suggesting they get married!

Oh boy, you weren’t wrong about shenanigans. Anything else you wanted to add before we get to the other kind of “shenanigans”? Well if you’ll allow me to get meta for just a moment I’d like to speak about how different my first viewing vs this viewing was.

Go on then. The first time I watched ‘To Love-Ru’ I was intrigued but not blown away, a part of that may have been how much the first episode was trying to impart while simultaneously give gratuitous air-time to its ecchi moments. Likewise I was enamoured with Haruna (Rito’s “since middle school” crush) but kind of annoyed by Lala–despite her good points. Now, with hindsight clouding my objectivity I can say Lala steals the show, even though this Lala isn’t really indicative of the Lala who will come to consume the screen time of the coming 25 episodes. Episode 1 Lala is far more measured and calculated than true Lala which will rear her awesome insanity in its full come Episode 3. But I suppose it’s something of a blessing we weren’t inundated with Lala’s full ‘Lala’ right off the bat. Which leads us too… 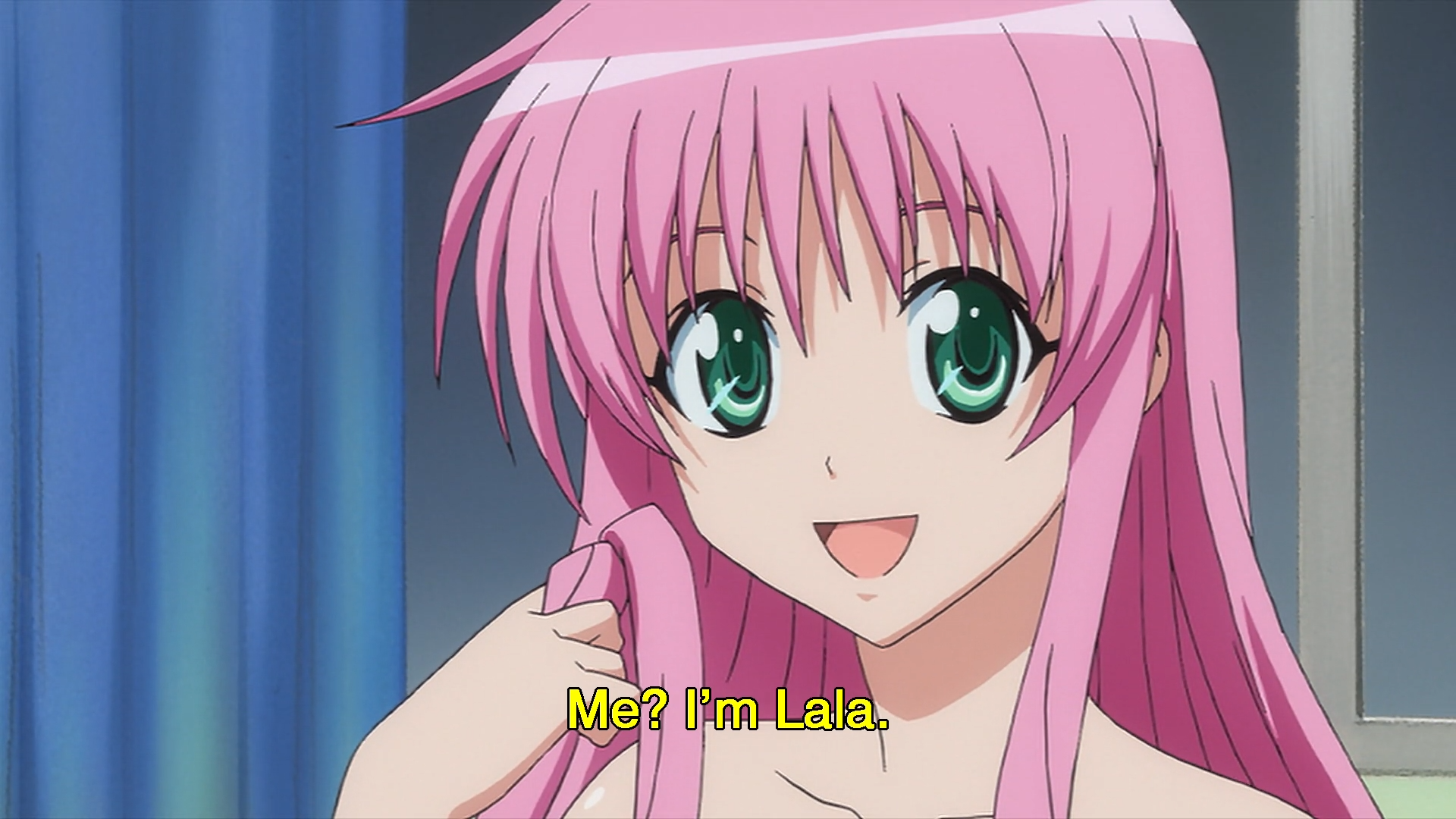 Is there any particular reason I have to be here? I have no interest in discussing fan service? Because I like to see you suffer.

Wow, not even pretending now? Okay fine, let’s get this over with… how is the fan service in the first episode? It’s kind of remarkable in how right they get it and how quickly too. I’ve mentioned in various places before that I think Kentaro Yabuki (the original mangaka) is probably my favourite artist in terms of how he draws the female body and while the animation and art style of the everyday scenes is ~good~ but nothing mind-blowing the same can not be said for the fan service. It’s clear that the show knew it needed to execute that particular part of the series flawlessly if it was to be well-received and while I can’t speak for its reception in Japan at the time I can say at least for me I was impressed.

Uh-huh and what about it makes it so impressive? It’s kind of hard to put into words, you kind of need to see it in motion–thankfully that’s what gifs are for!

Oh boy… There’s a weight to the animation of the breast physics, when Rito’s hands cup Lala’s breasts in the bath its like you could almost touch them yourself they seem so real. And this isn’t even the best the show gets in terms of animation quality and attention to detail.

And what about Lala herself? She’s beautiful, she’s cute, she’s sexy–she’s basically the perfect (anime) woman–well except for a certain black haired goddess but we’ll talk more about her when she appears later in the series. Plus her openness and liberated attitude about her body is very refreshing, it’s something that makes Lala so endearing as a character.

And the other girls? Well the only fan service we get from Haruna is a fantasy sequence in which Rito’s best friend Saruyama goads him into fantasising about her in a bikini–it’s a brief pan over a still image but it’s still well drawn. Haruna’s a very sweet girl who I have some minor issues with but I won’t bring them up until they are more relevant to the episode in discussion. And then of course there’s the girl that is the Internet perverts favourite for lewding (at least if the sheer number of fan-art and doujin’s are anything to go by)–Rito’s little sister Mikan.

“Little sister” should I have the FBI on speed dial? Jokes aside Mikan is something of a grounding force for the series, especially as it progresses into seasons 3 and 4 (getting ahead of myself again, I know) but even in her two brief scenes her character is already solidified–in her wry sense of humour and almost parental authority over Rito. In any other series a character as “normal” as Mikan could be a detriment but here she’s a delightful antidote to the craziness. But the show doesn’t feel the need to lewd her (yet lol)

So final thoughts and score for Episode 1 of ‘To Love-Ru’? Unable as I am to really give a first impression of the series as this is the second time watching it all I can say is that this first episode was even better than I remembered. Obviously a lot of that will be because of the fondness I’ve acquired for these characters over the 80 subsequent episodes I watched after but it’s also an expertly crafted 24 minutes of comedy, romance, sci-fi action, ecchi and even a bit of intrigue. It’s already done a great job at establishing Rito’s personality (his almost comical embarrassment in the face of any kind of nudity) as well as the connection between him and Haruna. If I were to complain about anything it was the aforementioned characterisation of Lala which feels out of step with the rest of the series but I think it can be excused given the tone it was trying to strike with the whole seriousness of “being pursued by bad-guys” shtick. My score for the episode is 93 out of 100, while my score for the fan service is 80 out of 100.