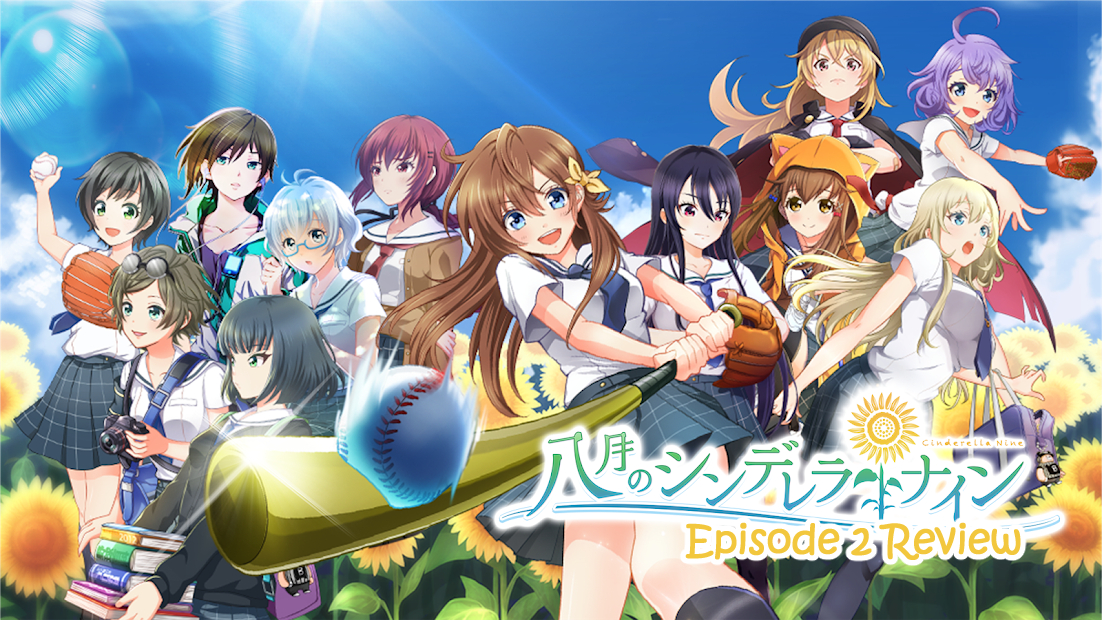 This is a part of a collaboration review between myself and Irina (of I Drink And Watch Anime) with my parts represented by bold text and Irina’s in regular.

And here we are with episode two! It seems to roughly follow the formula of the first episode–trying to recruit new girl who has some desire to play baseball but has some emotional/physical boundary impeding her from doing so. What do you think about this being the episodic formula for the time being? So far this is almost beat for beat the first season of Free!. If it was just a bit more fanservicey and they were playing in swimsuits, I would have trouble telling the two shows apart… It is a deeply formulaic but then again so are most sports anime. It’s part of why they are comforting.

This time it’s Waka we’re introduced to, who previously was the adviser to her big brother’s little league games when she was (presumably) in elementary school. And while she was somewhat a savant at the strategy side of the game, she’s always wanted to get off the bench and play the game itself. I liked her story, it was endearing to have such a strong character type offer her vulnerabilities to the audience but keep them mostly secret from the rest of the club. The OP tells us exactly who’s gonna be on the team so now we’re just going through the motions to recruit all the girls.

I have to admit, I didn’t quite understand Waka’s trauma. Like she’s bad at sports so it made her sad but now she’s not sad anymore. Not that it bothered me at all. I’m not expecting great character craftsmanship here. The brother is potentially the most generic side character I’ve ever seen. It was almost endearingly boring. These kind of girls are almost ~exactly~ like this, you need to watch more CGDCT shows, its basically a staple by now! Badly written? That’s mean Matt. I’ll have you know there are some great CGDCT shows! Don’t put words in my mouth!

I was kind of surprised they found a place to train so quickly, I thought this particular dilemma was going to last a few more episodes. But it was nice to see them come together to bring it back into usable order. I hope they spend more time restoring the field. There’s great relationship building potential in trying to build something together.

Also, I’m glad that Akane’s slowly getting better at various aspects of baseball and they haven’t rushed through her development. She’s probably my favourite girl so far, mostly due to the fact that I was hopeless at sports too–also she’s adorable. I think Akane is suppose to be everyone’s favourite. It even looks like they have a higher budget for animating her than any other character on the show. It’s sort of weird. Scenes where she’s in are of consistently higher production value. I wonder if they’re going to make branded hoodies are just figs and body pillows for merch…What do you think? I think I’ll need to buy that body pillow… I mean what?!

What was your favourite part of the episode, Irina/did you have anything else to add? Honestly, not that much happened. I did like the explanation on how to shape and soften a baseball glove. I always like it when it sounds like the writers care a little about the sport, it makes the character’s passion seem more authentic.

In fact the only note I took is: Is Matt going to name this post “No Glove, No Love?” Damn, that’s a good review title, Irina… Imma steal it! Thanks!

Join us next week on Irina’s site for Episode 3!

2 comments on “No Glove, No Love – ‘Cinderella Nine’ Episode 2 Review”