For every manga that gets brought to life on our screens through an anime adaptation there’s thousands–nay–tens of thousands of manga that will probably never see their beautiful black and white pages brought to life through animation. For some manga, the reason is obvious for others not so much. In this post I’ll be counting down my personal picks for manga I desperately want adapted into anime and my speculative ‘odds’ on whether they’d get the anime treatment. This list is ranked, not by the percentage odds chance of anime happening but rather my personal preference for which manga I want the most to be adapted. 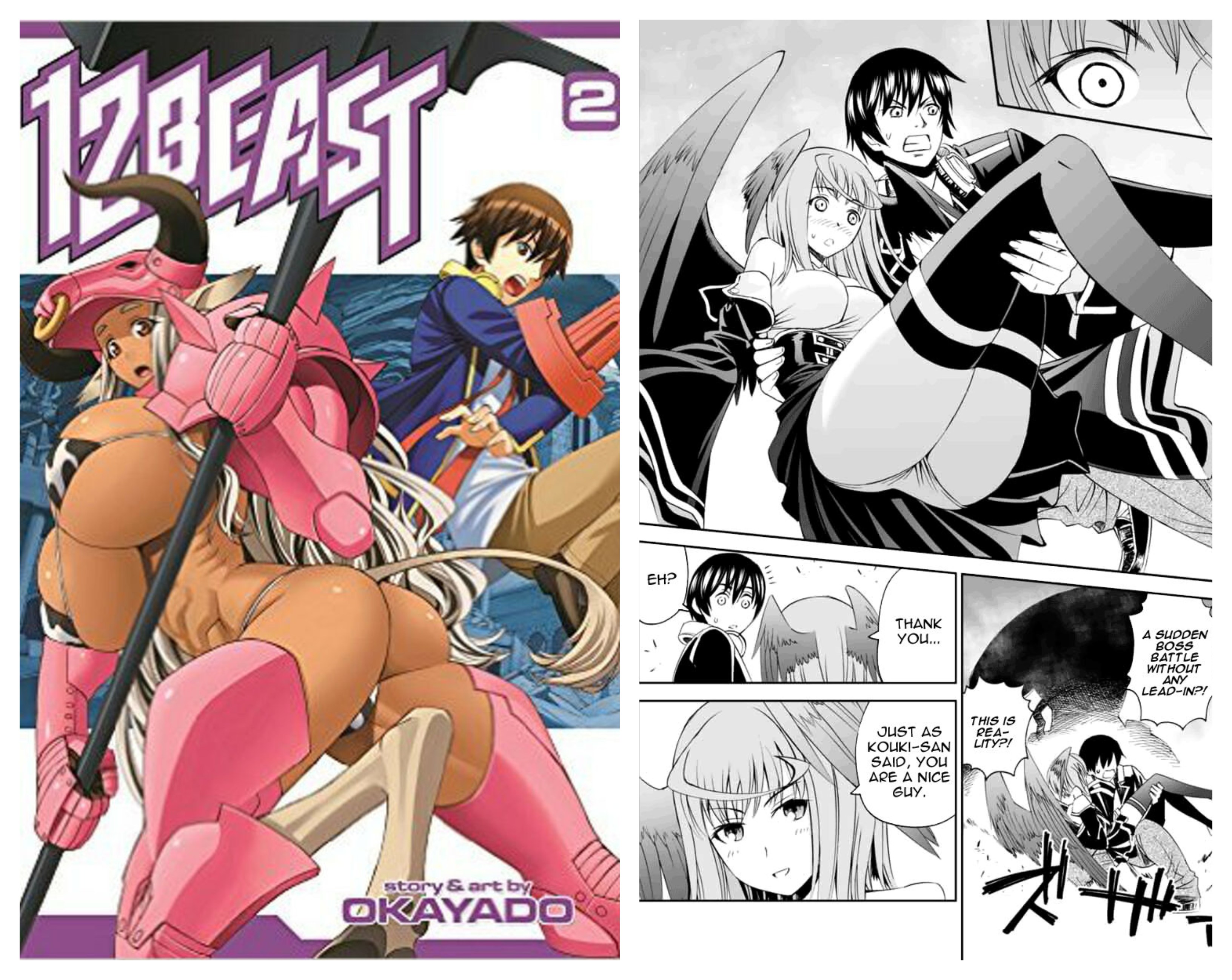 It’s a pretty standard isekai harem kinda deal, except all the girls are monster girls. Oh and did I mention it’s from Oyakado the mangaka of ‘Monster Musume’? Naturally this would be the perfect fit for an anime, as it combines the shonen-action style tropes with that popular isekai flavour and adds in the fan-service shenanigans expected of the author. Do I think this manga will get an anime anytime soon? Probably not, it doesn’t seem like it’s a popular title in Japan–in fact it’s more likely we get a second season of ‘Monster Musume’ before anything from this series eventuates in the animated form! 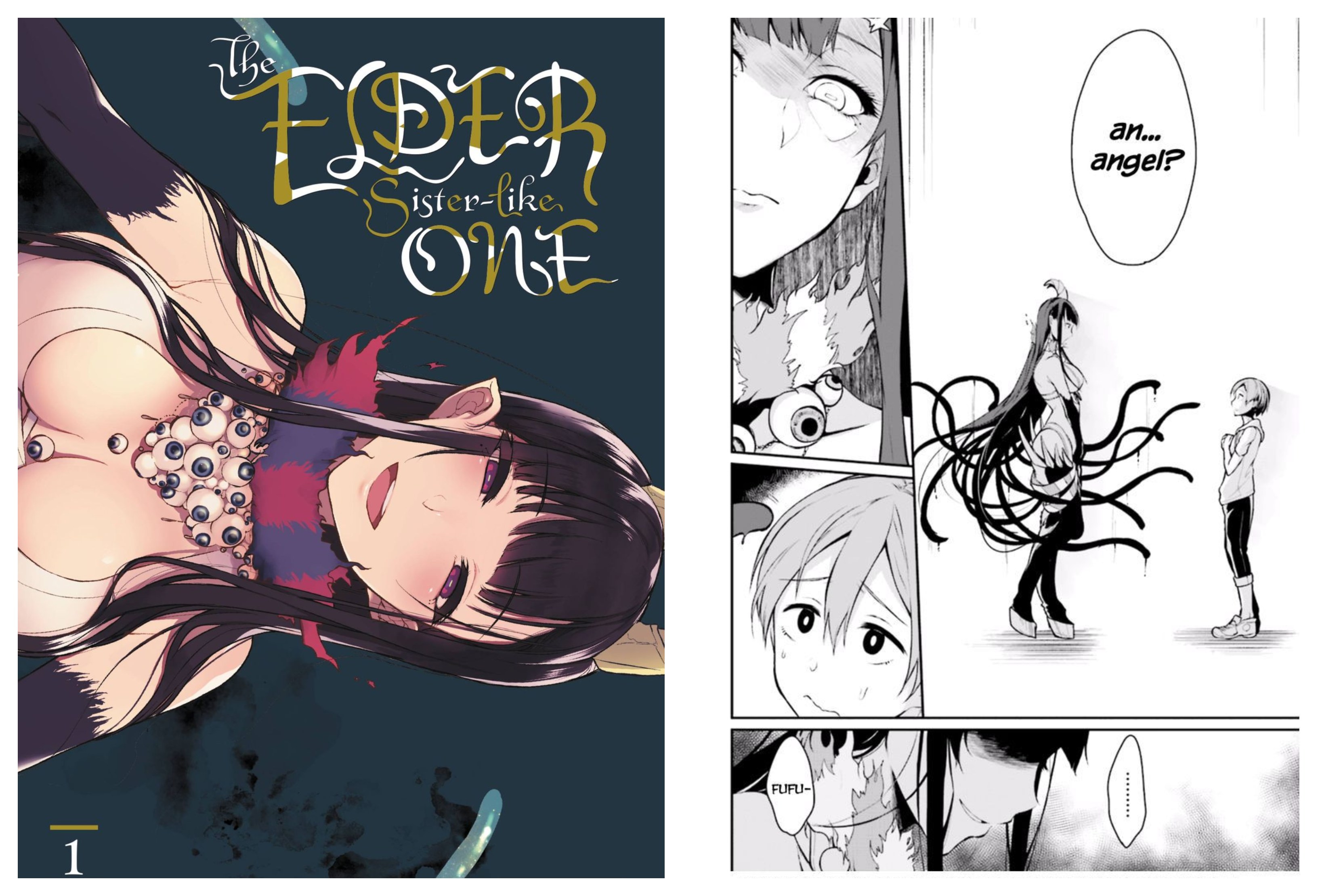 Originally based on a hardcore shota doujinishi about an orphan who wishes for an older sister and ends up summoning a Lovecratfian elder-god, ‘The Elder Sister Like One’ and more specifically the main character was so popular that not only did the series spawn a safe for work and surprisingly wholesome manga adaptation but it’s also had so much merch produced (from figurines, tapestries, desk-art and keychains) that it’s absolutely a given that this series will become an anime at some point. If you’re a betting kind of person this above all other picks on this list has the greatest likelihood of becoming an anime sometime in the near future. 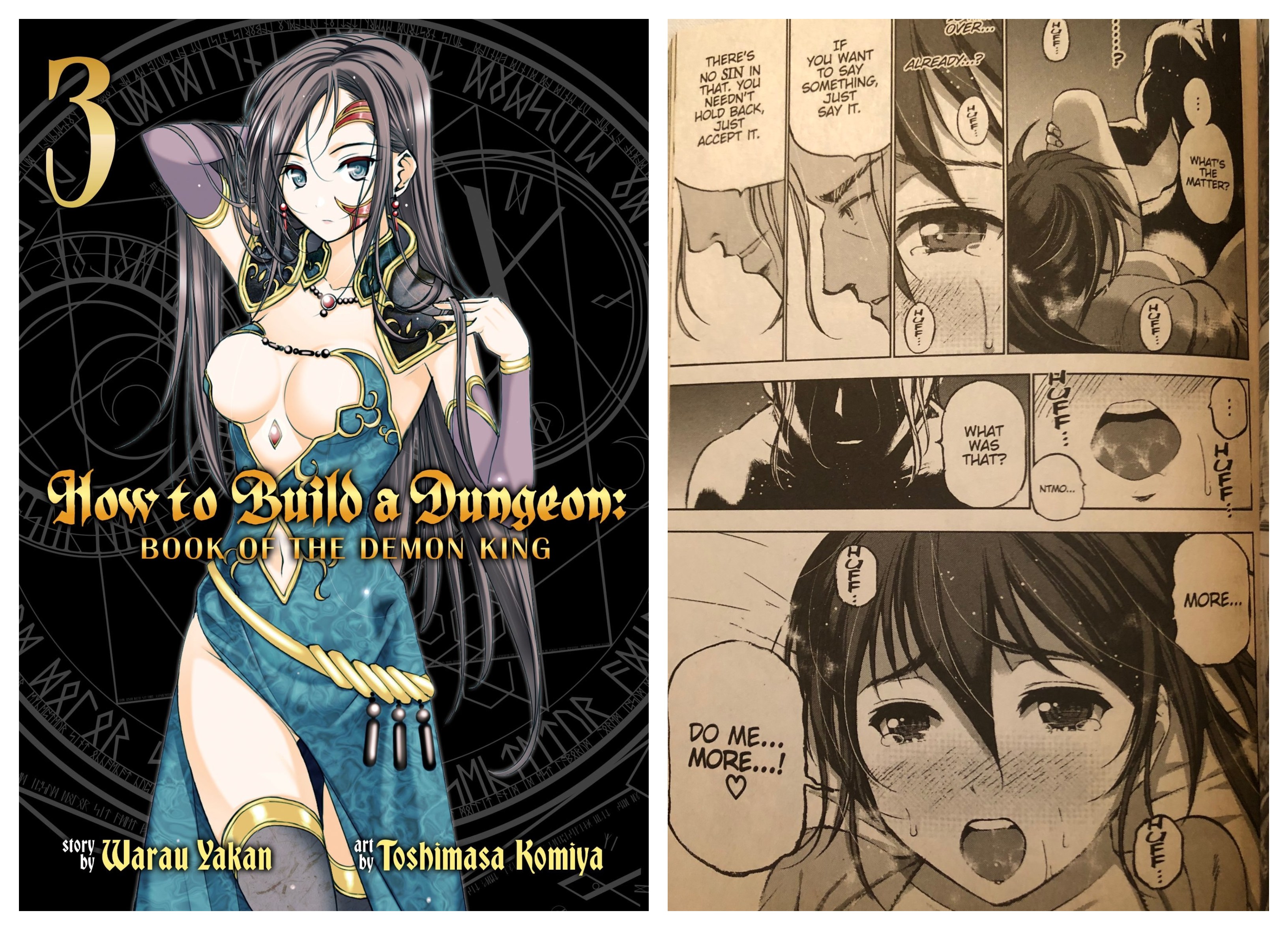 What about this manga series has anime potential? A dark, layered and compelling world filled with complex, problematic and charismatic characters and a unique approach to storytelling. What’s stopping it from being adapted to an anime already? Lots and lots of sex, like every chapter a plot-intrinsic sex scene happens. Personally I think this is an amazing series that’d give the likes of ‘Goblin Slayer’ and ‘The Rising Of The Shield Hero’ a run for its money (in terms of being controversial) but I think it’s unlikely we’ll see an adaptation of it any time soon–if at all. 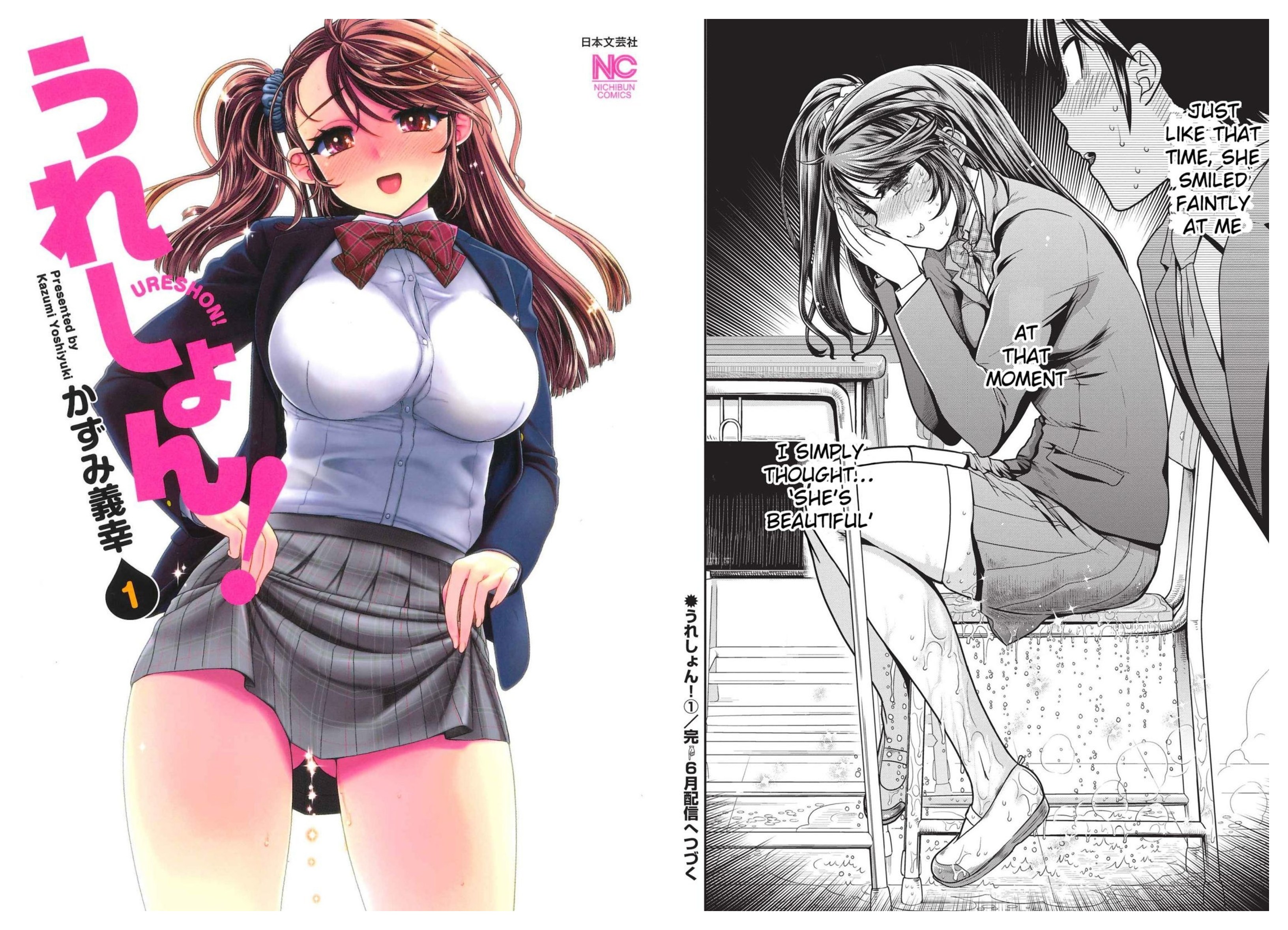 Okay so I put this in the list mostly for the lulz but there’s no way this series would ever get an anime adaptation. If you don’t know what it’s about, well let me put it succinctly, it’s a romantic comedy about a guy who falls in love with a girl after seeing her piss in public. Much pissing ensues. 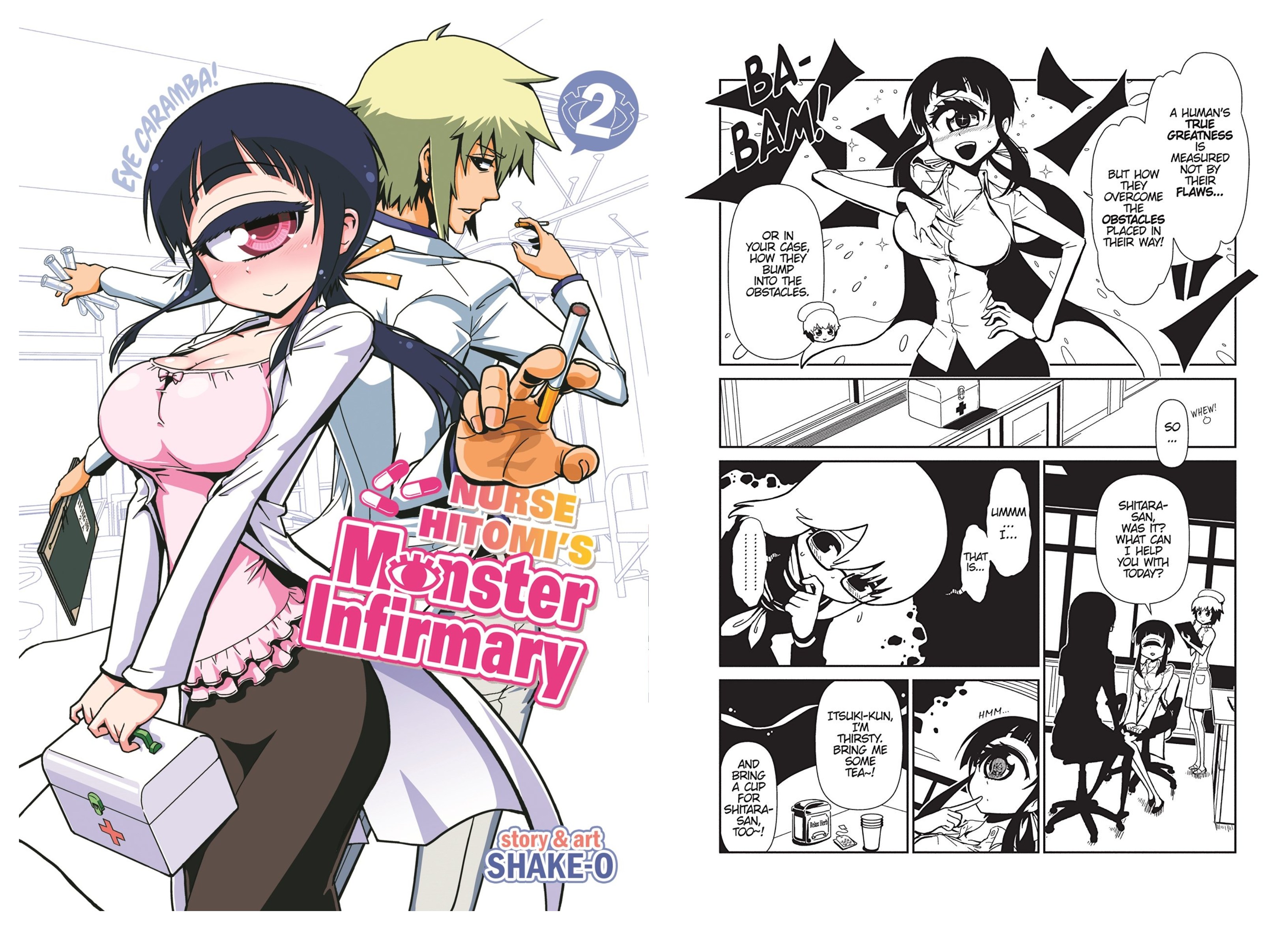 Out of all the manga on this list this is the one series I’m most surprised hasn’t been adapted yet. It’s a slightly ecchi, but mostly wholesome slice of life comedy series dealing with a one-eyed high-school nurse who treats (both physically and mentally) the students of her high school who have all manner of ‘monstrous’ conditions and qualities. It’s a very body-positive, affirming series and is also pretty damn funny. We’re already 8 volumes into the manga and no news of an adaptation yet, but I’m still mildly confident we’ll see an anime version of this series someday! 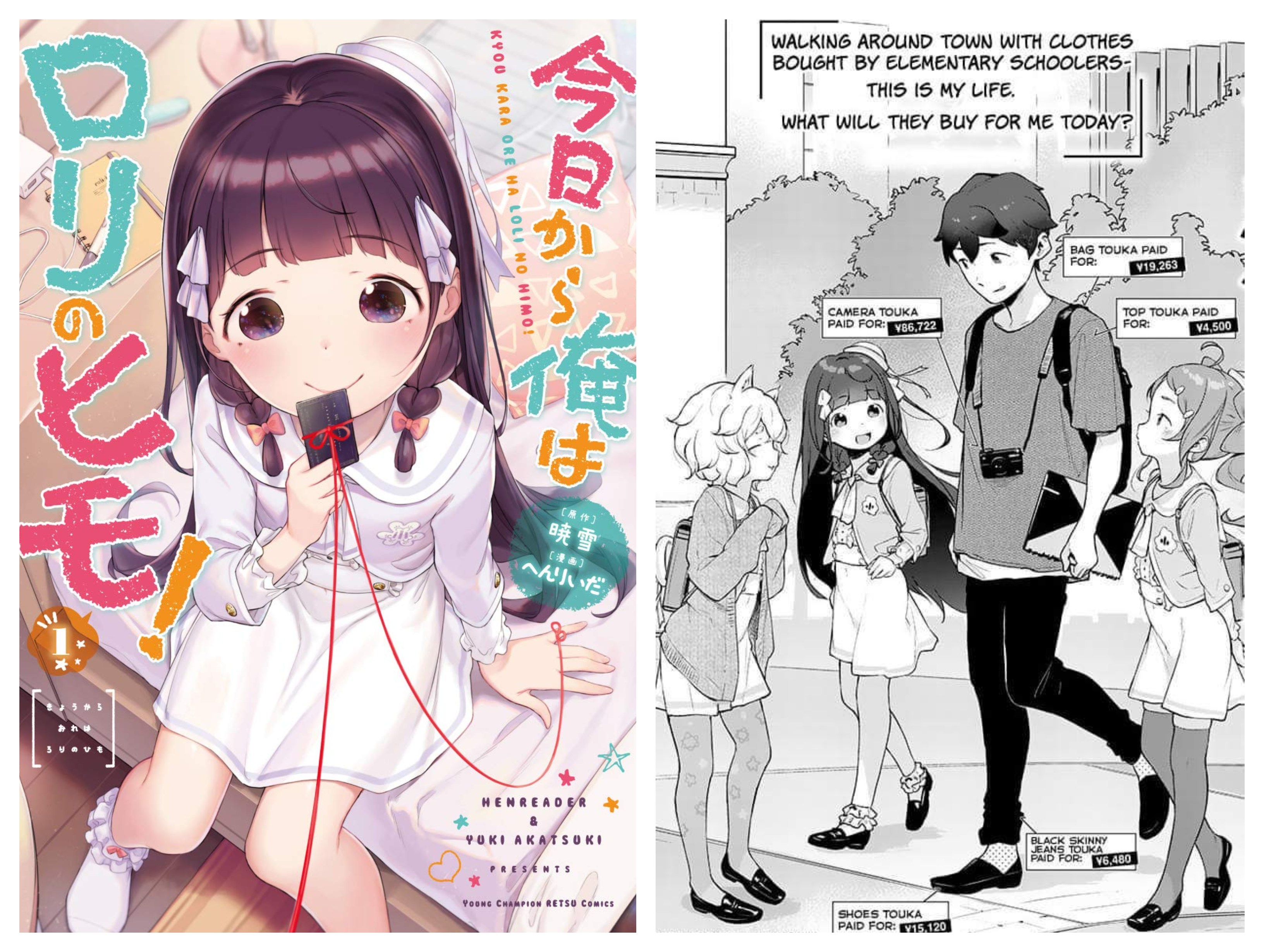 Long story short; this is basically just wish-fulfilment escapism for otaku lolicons. I’ll probably review the manga in full at some point but all you need to know is: aspiring teenage mangaka catches the eye of millionaire fifth grader who works/is a large stakeholder in a publishing house and decides to become his patron. He moves in with her and all manner of inappropriate shenanigans ensue. The reason I’ve put the percentage chance of this (of all things) receiving an anime adaptation is twofold. Firstly the art is by a “famous” doujin artist (if you want to remain off FBI watch lists I advise you don’t Google his works) and secondly this kind of series has been popular in recent seasons (UzaMaid!, Wataten, etc) so it fits with the current trend. 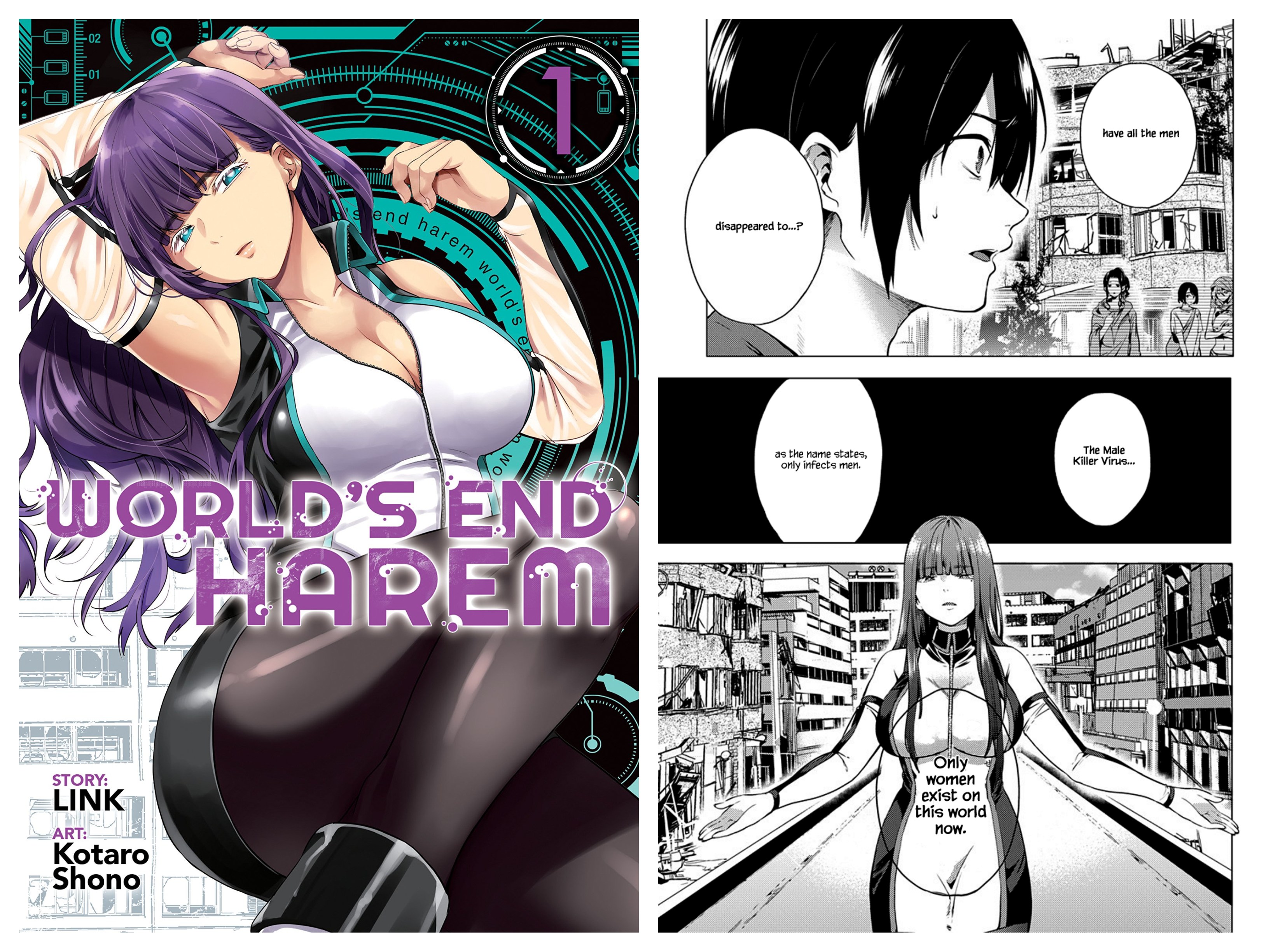 Story-wise, ‘World’s End Harem’ is a little bit dull–sure there are interesting moments but they are mere stepping stones midst the rampant torrent of fan-service and nudity that made this series a best seller. I think it’s safe to assume an anime version of this will come sooner or later–it’s just a matter of finding a studio that’s suited to the task… 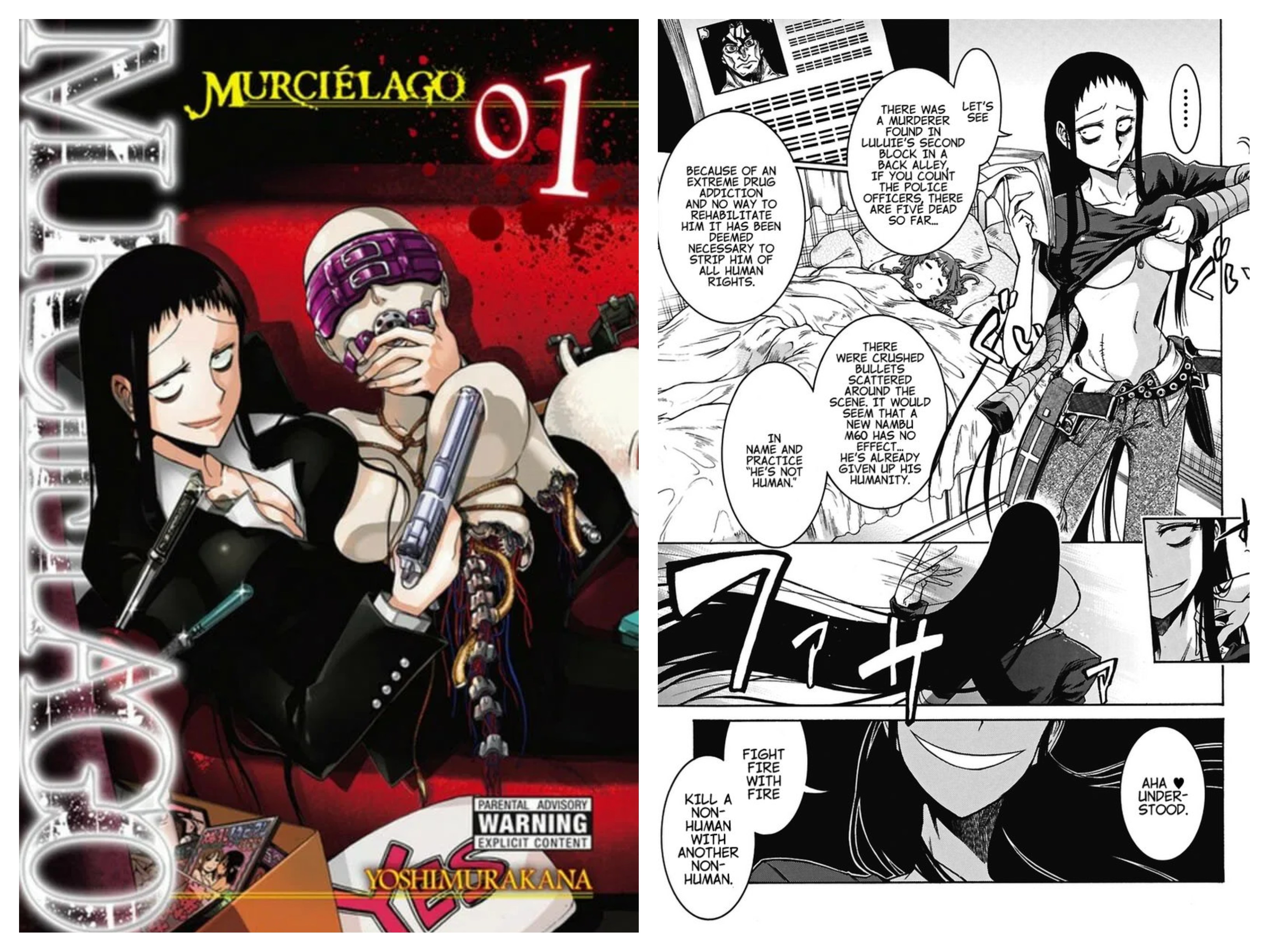 ‘Murcielago’ is badass. It’s about a lesbian serial killer (by which I mean a serial killer who is a lesbian not a serial killer of lesbians) who is saved on death row by the Japanese government and begins to work as a contract killer dispatching of (arguably) worse villains than her who are posing a threat to society. This series is dark and gory but also very darkly comic–if you’ve ever seen the movie ‘Super’ it’s kind of like that–only with more ridiculous action and cunnilingus. Personally I think this’d be an amazing anime but the fact we’re 14(!) volumes into the manga and without word of any possible adaptation makes me think this has been put in the ‘too hard’ basket. I hope to be proven wrong though! 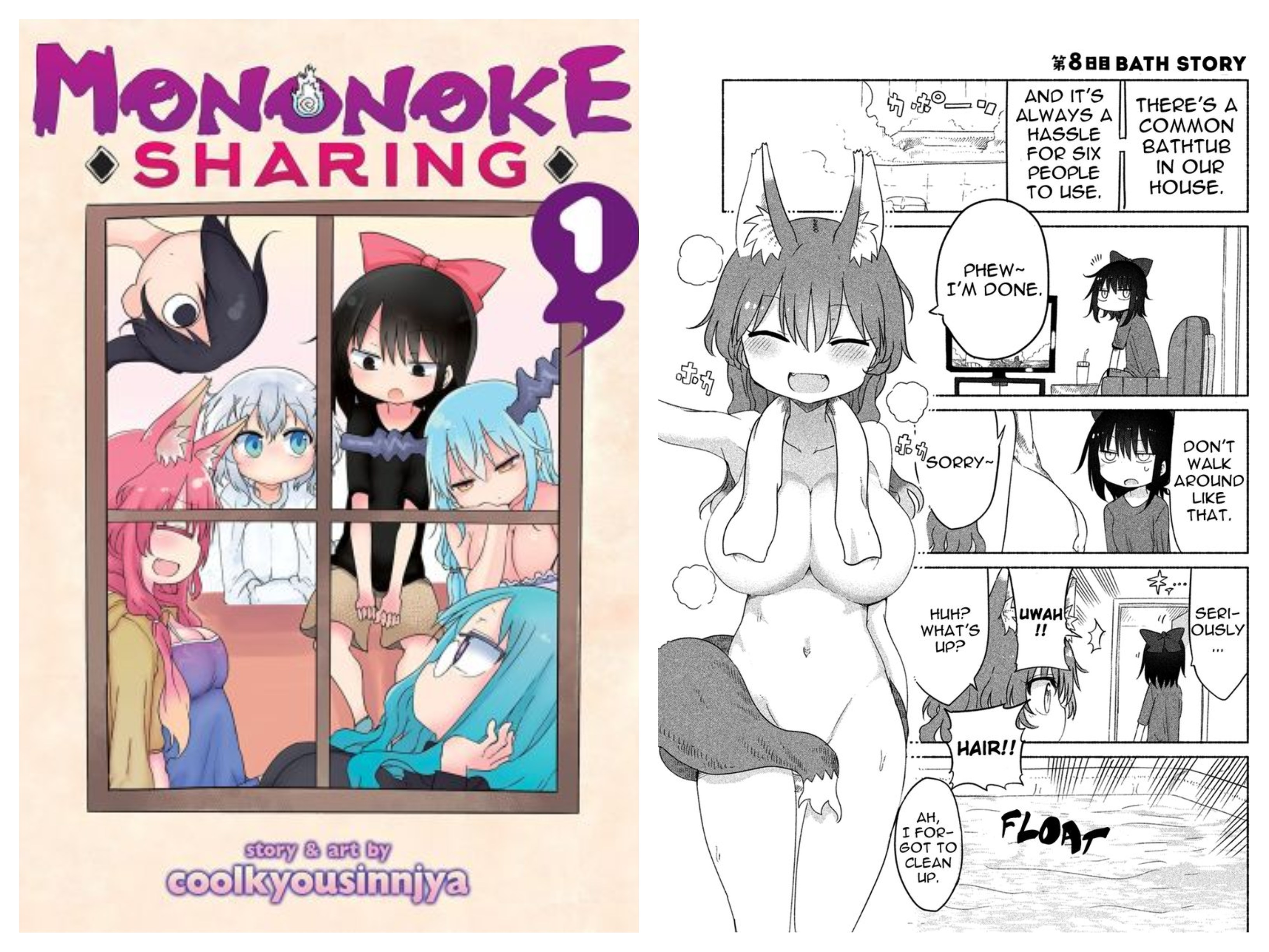 I love this manga, and no surprise as it’s by by favourite mangaka; Coolkyoushinja who is responsible for ‘Miss Kobayashi’s Dragon Maid’. And while there are similarities between the two series’ (busty monster girls, comedic slice of life focused) where I prefer ‘Mononoke Sharing’ is its sexually liberated attitude. I talked more about it in my review for volume 1 of the manga but basically it’s a bawdy and inappropriate sex comedy. And while everyone’s hyped for a second season of the aforementioned ‘Dragon Maid’ I’d happily take a season of this instead. Will it happen? If ‘Kobayashi’s’ 2nd season breaks sales records in Japan then it absolutely could, but otherwise its a bit of a long shot.

Honourable Mention: Darling In The FranXX
[2%] 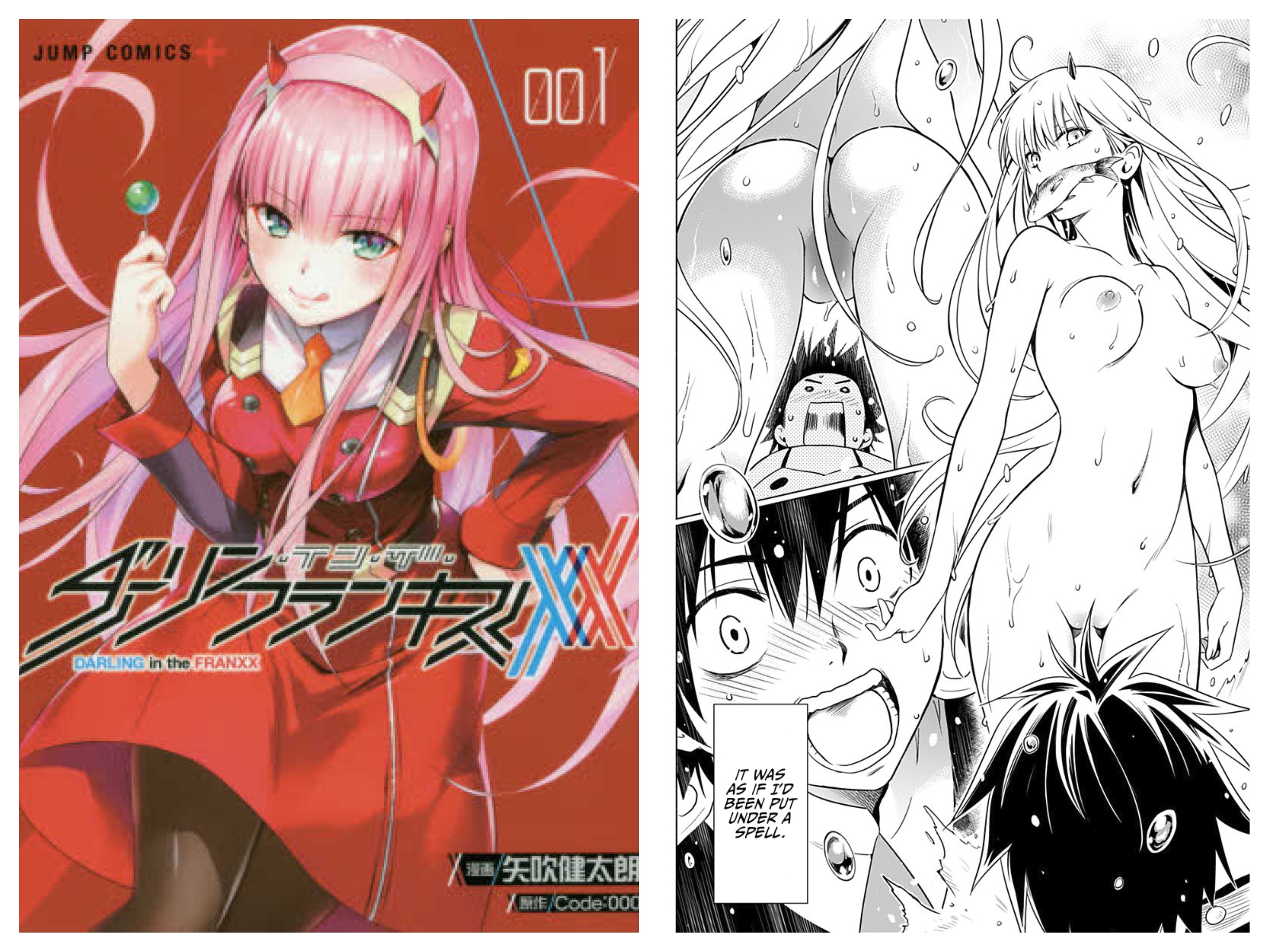 What’s this you say? ‘Darling In The FranXX’ is already an anime? Not Kentarou Yabuki’s version! Commissioned concurrently with the anime and still running now, the manga version is a mostly faithful retelling of the events of the anime with one substantial (for me) difference–hardcore nudity! Now I know what you’re thinking, is “hardcore nudity” alone enough of a reason to remake a series? Well, when it’s from artist Kentarou Yabuki it is! If you don’t know who he is by his name alone he is responsible for the ‘To Love-Ru’ series, a.k.a mankind’s greatest work of art and seeing Zero Two and Ichigo and the rest all lovingly drawn by his masterful hands is a delight. If not a full remake then I’d settle for a couple of OVA episodes with just the nude scenes. It’s unlikely to happen, but then again the manga sells extremely well so anything is possible. 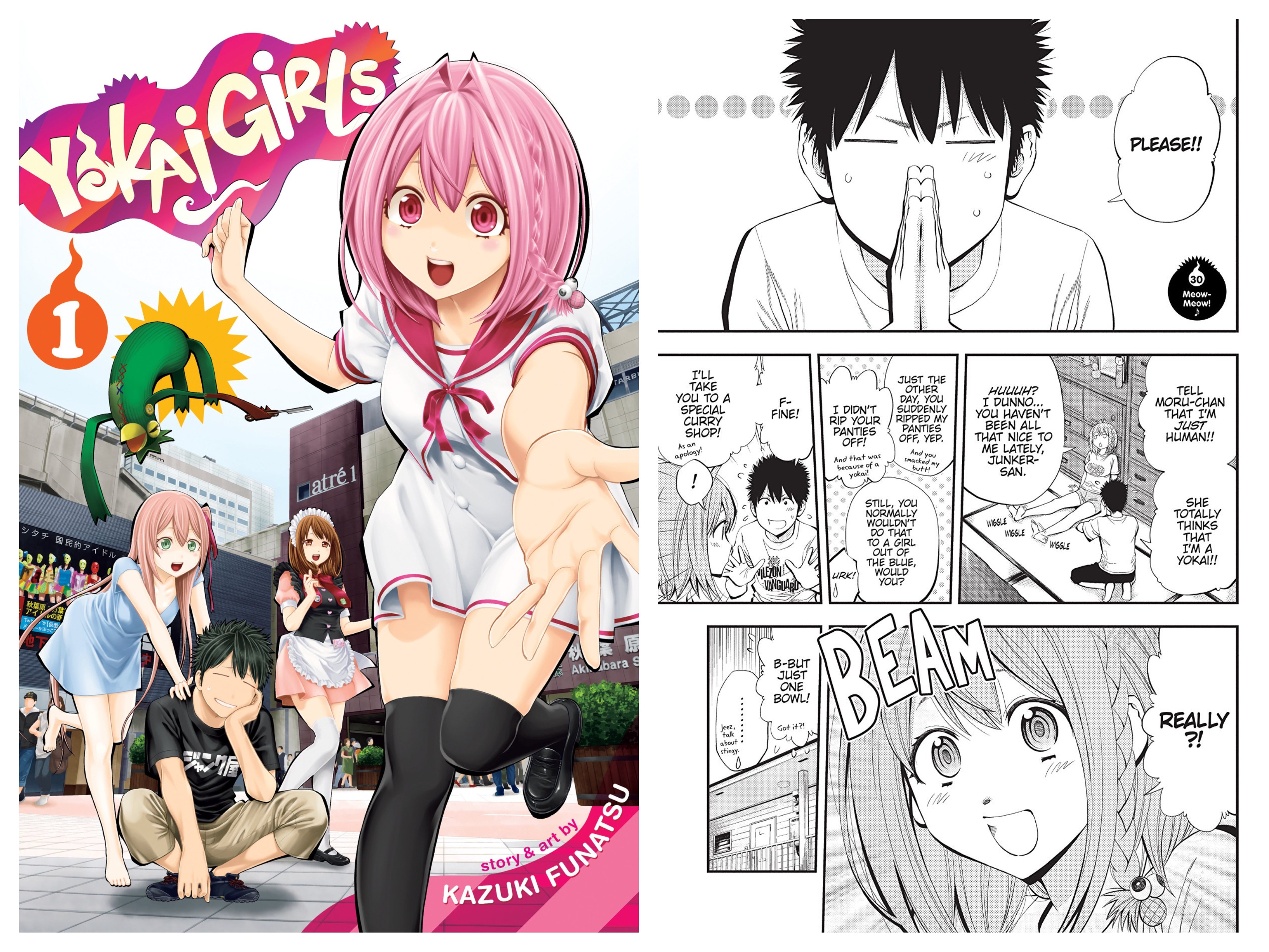 Apologies in advance but this will be a kind of underwhelming Number 1 pick. Basically this is just an excellent ecchi harem manga with action-y elements set in Akihabara with compelling characters and ridiculous villains. It’s basically like ‘Yuuna and the Haunted Hot Springs’ just with a lot more subversive elements and random irreverent comedy. It’d make an amazing anime but I’m doubtful it ever will due to one simple fact–the manga has ended (after 14 volumes) and it’s rare a manga gets an anime adaptation after its completed.

And that’s my 10 manga I want adapted into an anime (and the percentage chances of each happening) let me know what manga you want made into an anime! Thanks for reading!