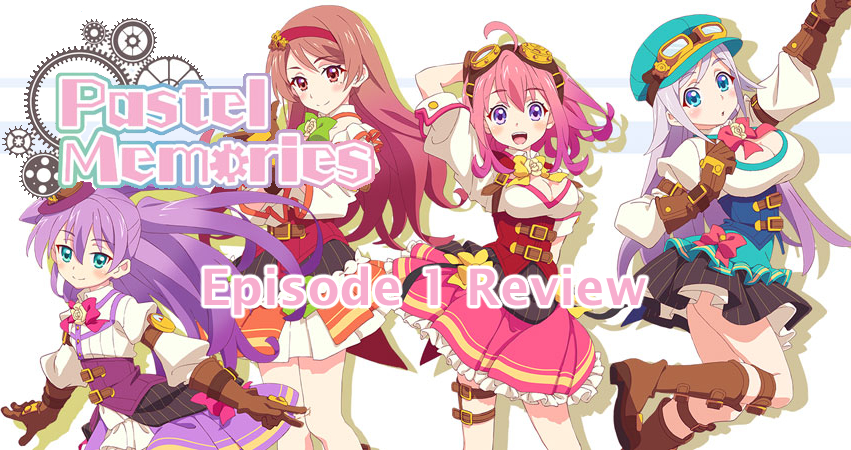 So how’s this episode? It feels good to have my interest pandered to so directly, and that’s exactly what this anime does!

You mean aside from the majority of anime which already does that? Ahem, well sure. But this like some Inception shit we’ve got going on here, you know like “yo dawg, we heard you like anime and manga so we put anime and manga in your anime about manga”.

So what’s this show even about? It’s set in a dystopian hellscape where the center of all okatu culture in Japan, Akihabara, has been reduced to looking like the rest of Japan! That is to say it looks like any other generic business district in Tokyo. And the poor otaku girls who are the centre of this story only have six anime/manga stores to get their anime and manga from! It’s truly a depressing look into Akihabara’s darkest timeline!

I detect a hint of sarcasm. Don’t you love Akihabara, like isn’t it literally your favourite place on Earth? Yes, that is correct, hence the whole “pandering directly to me” thing at the start of this review. But it’s kind of quaint to think that the Japanese think that having only 6 anime/manga stores left in a single district is somehow a depressing thought. Most countries would be lucky to have that many otaku stores in their entire state. But then again this isn’t about the rest of the world, this is about Akihabara.

I’m still not sure what this show is about? Funnily enough neither was I until like the last two minutes of the anime. The majority of the episode is spent looking for missing copies of the manga ‘Is The Order A Rabbit?’ (it’s not called that in the show but that’s what they were referencing both with the parody title they gave and the very noticeable cover art). The reason they’re looking for it is because they run an otaku cafe and one of their young customers wants to read it, and since otaku culture has taken a dive (for unexplained reasons) they’re doing their best to preserve the culture. After looking all over town and getting all but the first volume, the plot proper of the show starts as a magical gateway of churning gears opens in their cafe and three girls come through, talking about how they managed to “defeat the virus”. The three main girls (Izumi, Ayaka and Irina) who we’ve been following for the majority of the episode notice that a “virus” has started attacking the ‘Is The Order A Rabbit?’ manga and so main girl Izumi volunteers to go into the manga world to defeat the “virus” that’s trying to eradicate the memories of the manga.

…Okay. Basically this show is going to be travelling into different ‘manga’ worlds each week to deliver ridiculous amounts of otaku fan-service.

And what’s this ‘Is The Order A Rabbit?’ manga world going to be like? I’m surprised you don’t remember it was one of the first shows I reviewed for this site back in February 2018, it’s one of my favourite CGDCT slice of life shows and it’s also incredibly popular in Japan hence why it was obviously chosen. Though the episode ends before any of the characters get there we see in the preview for next week’s episode that it will indeed be set in that universe, so needless to say I’m excited! I’m just worried that ‘Is The Order A Rabbit?’ wasn’t as popular in the West so this is going to leave a lot of casual anime fans out of the loop and thus they won’t bother to watch any more.

Right. Anything else you wanted to add? Yes a few things actually first, it was a heck of a lot of fun seeing all the references to other manga in this anime, yes that’s incredibly cheap pandering but I don’t care, gimme more! Also, this show has 12 girls in its main cast, this is going to be a bit of a pain to keep up with names but at least the ones we get introduced to this episode seem distinctive (If tropey) enough.

Great, so your final thoughts on the first episode and who do you recommend it to? I think the tone of this episode was a bit misleading, it made it feel like a slice of life show when in actuality it’s (most likely) going to become a light-action/adventure series. Regardless I thought this episode was a lot of fun, it’s nothing special as it stands but the promise of going into different manga worlds is very intriguing–I just hope they make the most of this premise and don’t settle for the ‘safe’ options each time. If you’re a shameless Akihabara-lover like me then this is a no-brainer, for everyone else it’s worth a watch but I think it’ll take at least another episode to get a feel of this shows proper premise.