If you haven’t read Day 1 & 2 of my Japan Trip 2017 blog series, please do so before reading this post for context and continuity’s sake. Day 3 and Day 4 are also available to read.

Also, some of this post contains very NSFW imagery and descriptions.

Two days in one post, huh? Sometimes the days spent travelling between destinations don’t offer much in the way of content. Also it rained a lot these days so outdoor activites were limited–least that’s my lazy-ass’s excuse!

So what’s first then for Day 5? Breakfast as Japan’s favourite fake French place ‘Vie De France’, I don’t remember what these particular ‘noms’ were, but I’m sure they were adequate… probably?!

Uh-huh, anything else? Yes, this was lunch! Again, not sure what it was or where it was from… haha these posts are deteriorating fast, but I promise I pick up my game again soon!

Tch. Did you do anything other than food this day? You’re going to regret saying that, things are about to get super uncomfortable and personal in here! Don’t say I didn’t warn you! That goes for you too readers, things are about to get very NSFW for the next two pictures and 5 paragraphs. If you want to skip this section, click here to jump past the NSFW stuff.

Uh-oh, what have I walked into? So I was in an adult store in Akihabara, and I saw an onahole I wanted… for those of you who don’t know what an ‘onahole’ is, well its a masturbatory aid, sort of like a fleshlight (if you don’t know what that is–then, well I don’t know what else to say). It’s a Rem and Ram (from Re:Zero) double onahole, one side is meant to be a mould of Rem’s vagina the other side Ram’s.

No comment. Continue. Anyway, at this stage I felt like I should get something for Sharon, the irlwaifu, since she was elsewhere (probably resting in the hotel) so I was looking through a random assortment of dojinishi (that’s fan-made porn if you haven’t heard of the term) and I found one of Levi from Attack on Titan, “perfect!” I thought, “she loves Levi!” But then my painfully obnoxious heterosexual insecurities began kicking in… “what if the clerk thinks I’m gay?” I thought… as if it even mattered I can say in hindsight, like I’d ever see this person again in my life… but I am ashamed to say I was concerned enough about a stranger’s opinions of my sexuality.

So what’d you do? I did what any sane and rational person would do in the situation, I bought a pair of “panties with younger sister’s smell” to balance it all out.

Okay, you’re going to have to explain what the hell that is before I call the police! Calm down, it’s considered a joke gift (even though it’s totally not), and the “smell” in question is artificially created, the Akihabara police cracked down on selling real used panties like 10 years ago so this is 100% ethical, no little sister’s were exploited in the making of this product.

That aside, how exactly does adding that to the proverbial shopping basket balance things out? Couldn’t you have just bought a heterosexual doujin to “balance it out” as you say? Hindsight’s a funny thing, in the moment it seemed like the smart play plus I thought it was way too unique a thing to pass up buying. But yeah, looking back I think adding that to the purchase only made me seem more problematic than I intended.

You are one weird individual. Is that all from that particular shop can we move on to ~normal~ holiday photographs? Dinner was yakitori (skewers of various meets and veg) accompanied with large drinks. It was very delicious.

Oh good another food post. And then after that Day 6? Yes, Day 6 had us moving on from Akihabara and on to Maihama, where we stayed at the very swanky (and yet surprisingly affordable) 4-star hotel The Oriental Bay Maihama. The hotel’s lobby had a gorgeous atrium that actually held a wedding on one of the day’s we were there. It was also Halloween so there were some decorations up for that. Being that it was just a single train-stop from Tokyo Disneyland the place was a lot more ~family~ oriented than expected so that was certainly a change from Akihabara’s antics!

Oh, so I take it Disneyland photos are coming soon? We arrived at the hotel after 2pm, so DisneySea and Disneyland are planned for the next two days. (We stayed in Maihama for 3 nights) However we did go pay a visit to Ikspiari which is kind of a fanciful looking shopping complex just outside the theme park. 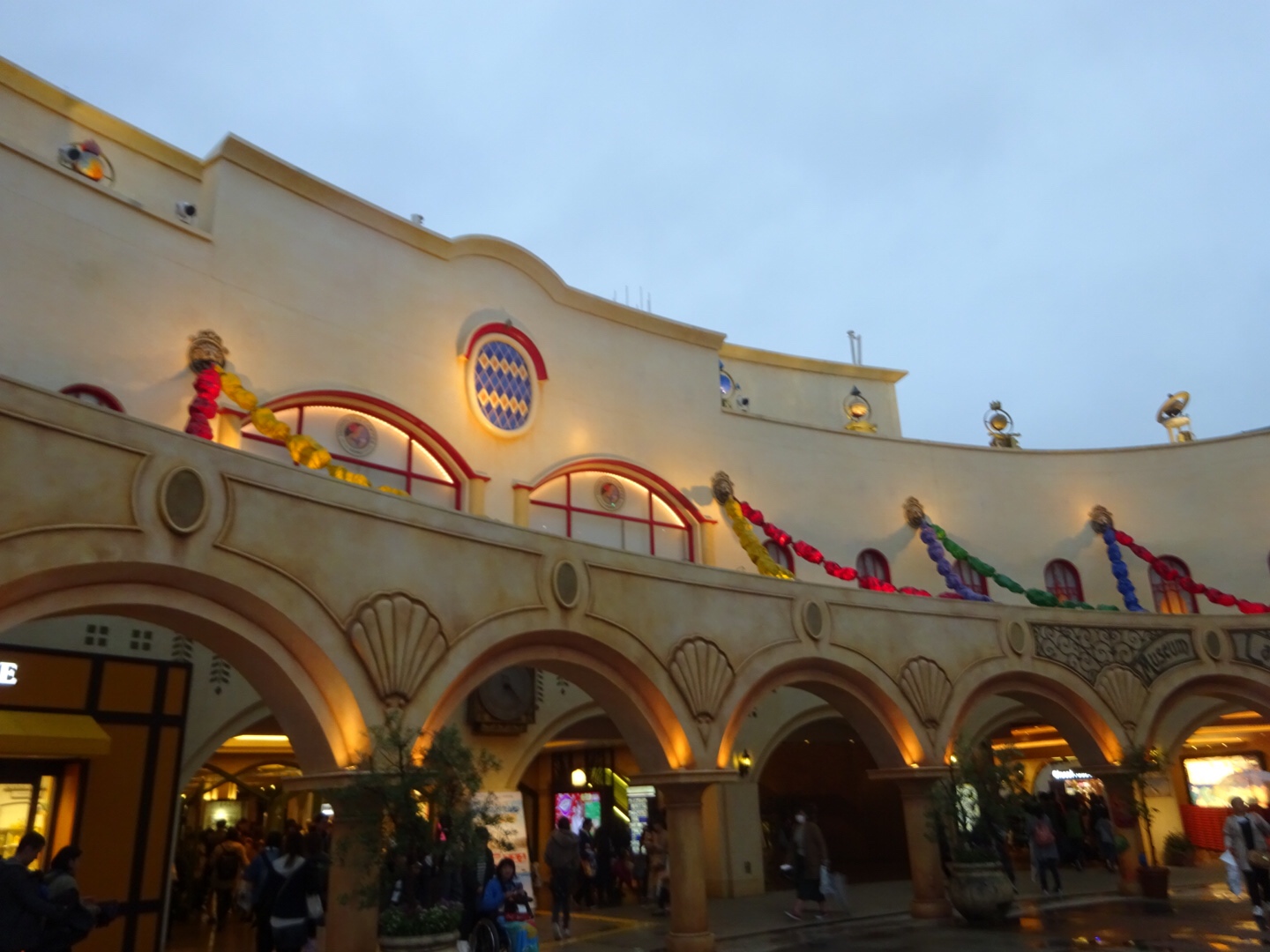 What, no food pictures? Apparently not, and if there’s no food pictures from a particular day it usually means we slummed it and had something safe and Western–a mistake I intend not to make on my trip next year! Although there was one food item that warranted a picture just because of how amazing it was, from the convenience store in the hotel (yes this hotel had a Lawson’s convenience store inside the building!) I found an ice-cream that ranks among my favourite of all time, not just for taste but ease of eating too! It’s basically a wafer brick, with ice-cream inside. Amazing. Why don’t we have anything like this in Australia?!

And that’s how we’re ending this post on a picture of a convenience store ice-cream, huh? Just be thankful I didn’t end with something lewd! Stay tuned because it’s only Disney-style wholesomeness from here as Day 7 takes us to Tokyo DisneySea! Just kidding, we manage to find a way to be lewd at a Disney park too.