What’s the important information? Music Girls is a Summer 2018 anime that ran 12 episodes through June to September. It is an original anime based on a 2015 anime short film produced by Studio Deen for the ‘Young Animator Training Project’.

What’s it about? Hanako has just returned to Japan after living in the United States with her musician parents, while at the airport she comes across the “Music Girls” an obscure eleven-member idol group with precisely 26 die-hard fans. Their manager Ikehashi, immediately finds Hanako’s look and personality to be ideal for their group, that is until she starts singing and find out she’s awful at it. Committed to helping the ‘Music Girls’ become the best they can be she joins them as their ‘secretary’ and helps out behind the scenes instead.

Why did you watch it? Initially this show wasn’t even on my Summer 2018 watch list, but after I dropped a couple of shows I decided to give a chance on the show, ordinarily I don’t bother with idol anime but something about this show seemed different. And ~boy~ was I right with that assumption!

Did you enjoy the show? No other show this season offered this level of unpredictable and undefinable joy, it’s not a ~great~ show, at times it hardly even a show, but is stupidly fun and endearingly so. At times it feels like a parody, while other times it feels like a student film—sometimes its heavy on the idol-shtick, whereas other times it leans into loose comedy while other times it comes across as sincere slice of life but never does it commit to one wholly. In any other this kind of lack-of-focus would be a negative but somehow here it just works—or maybe that’s just me…

What was your favourite episode? It’s hard to pick just one as the duality of this show means sincere episodes can be just as interesting as ~silly~ episodes. But the one that struck the balance perfectly and actually had some interesting and deep things to say while remaining simultaneously ridiculous is Episode 6 “Meat and Idols” which gave us the very progressive message that people should identify with message intended for anybody regardless of age, gender or social status while also tying it into an entire plot point about who keeps buying all the fried chicken at one of the idol’s favourite street-side eateries. 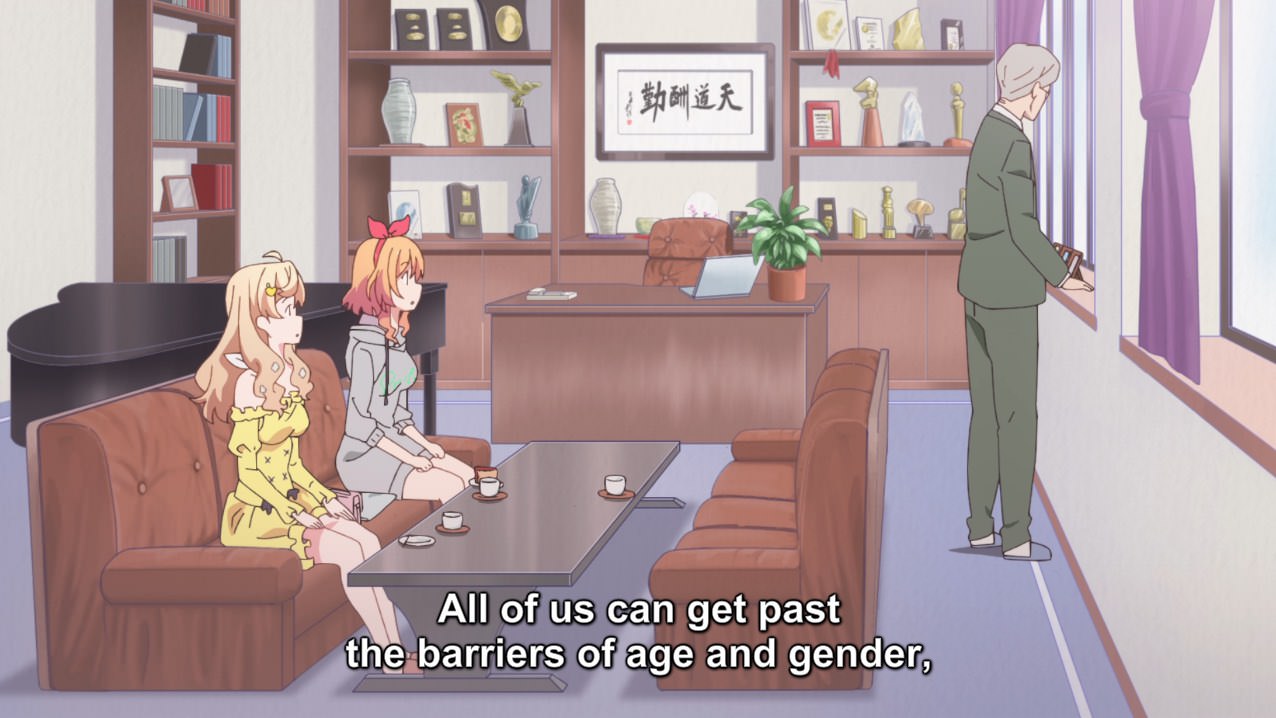 What were your most favourite things about the show? Aside from everything I’ve mentioned above, I did love the gratuitous bath scenes, which got so frequent that I realised this show spent more time in baths than ‘Yuuna and the Haunted Hot Springs’ an anime actually set in a bathhouse! 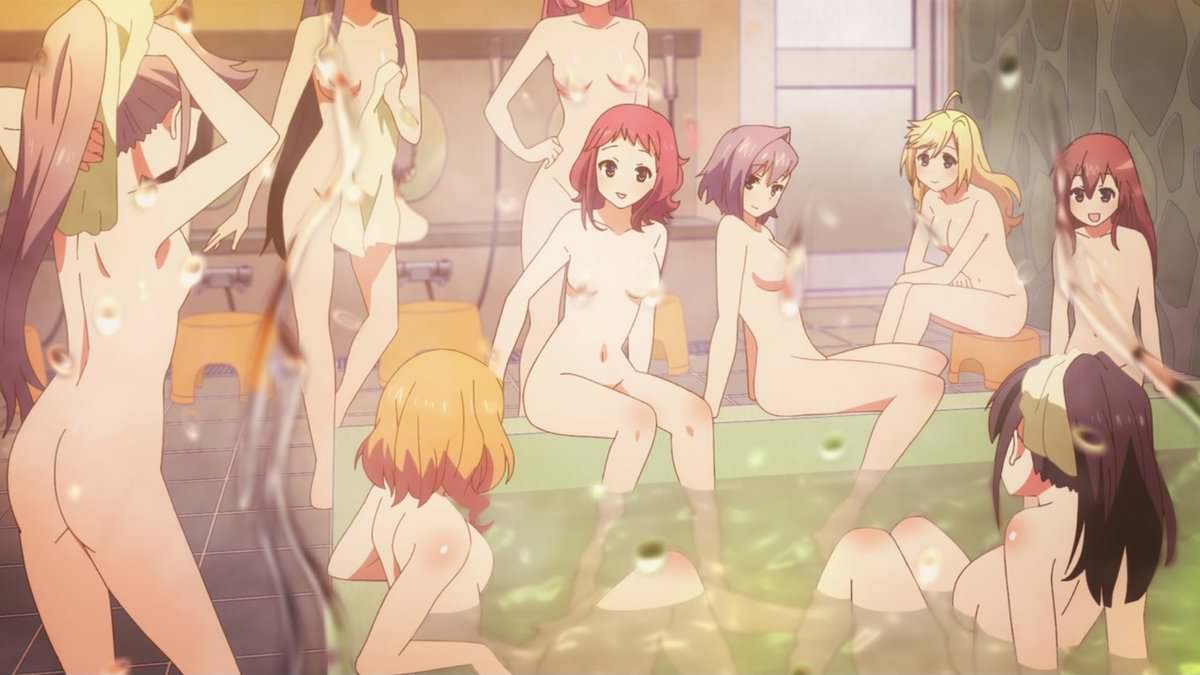 What were your least favourite things about the show? I never like to complain about animation quality, considering the short turn around time many anime have between animating and release and while a lot of the ‘shortcomings’ in this series are probably more to do with Studio Deen being a studio that’s ~loose~ with animation in general. But there were times during this season where I wondered if a work experience kid was put on a scene as occasionally animation felt below-amateurish. If it was intended then fantastic, but if not… well that’s a negative in my book. Also the songs that the Music Girls perform aren’t actually that good, which, you know is kind of a big deal for a series with ‘Music’ in the title!

Who was your favourite character? Sasame is amazing—she exists almost outside of the rest of the cast by being a character who would probably never actually be an idol in real life but is absolutely an essential character if we’re looking at this as a comedy/CGDCT show.

Thoughts on the OP (opening) and ED (ending) and the soundtrack in general? The OP, “Eien Shonen” by Yui Ogura is fantastic—not only is it an awesome and catchy song but it fits ~perfectly~ with the visuals, evoking a sort of 90’s sitcom aesthetic, what with the names of every character appearing on screen as they do. The ED is “Shining Peace” by the cast and it’s a competent if kind of generic piece by the cast—funnily enough though it’s better than any of the Insert songs in the show itself!

What’s something unique about this show? This whole show is unique, it feels like a rare and endangered species that needs to be protected—but at the same time—exploited and put on show for all to see just how ~weird~ this show is!

What other anime are most like it for the sake of comparison? Funnily enough this series’ silliness to sincerity ratio reminds me of another show with ‘Girls’ in the title. Comic Girls shares at least a passing similarity with this show, even if the aforementioned is much more polished and competent.

Who would you recommend it to? Anyone who doesn’t take anime too seriously and can enjoy something light-hearted and silly! There is a ~genuine~ attempt at making an anime underneath all the amateurish decisions, both creatively and technically but it’s hard not to get swept up by the nonsense, as often is the case!

Sum up the season in one sentence: ‘To an outsider an idol may seem silly and facile, even stupid, but dig beneath and you might find something more meaningful—even human.’ 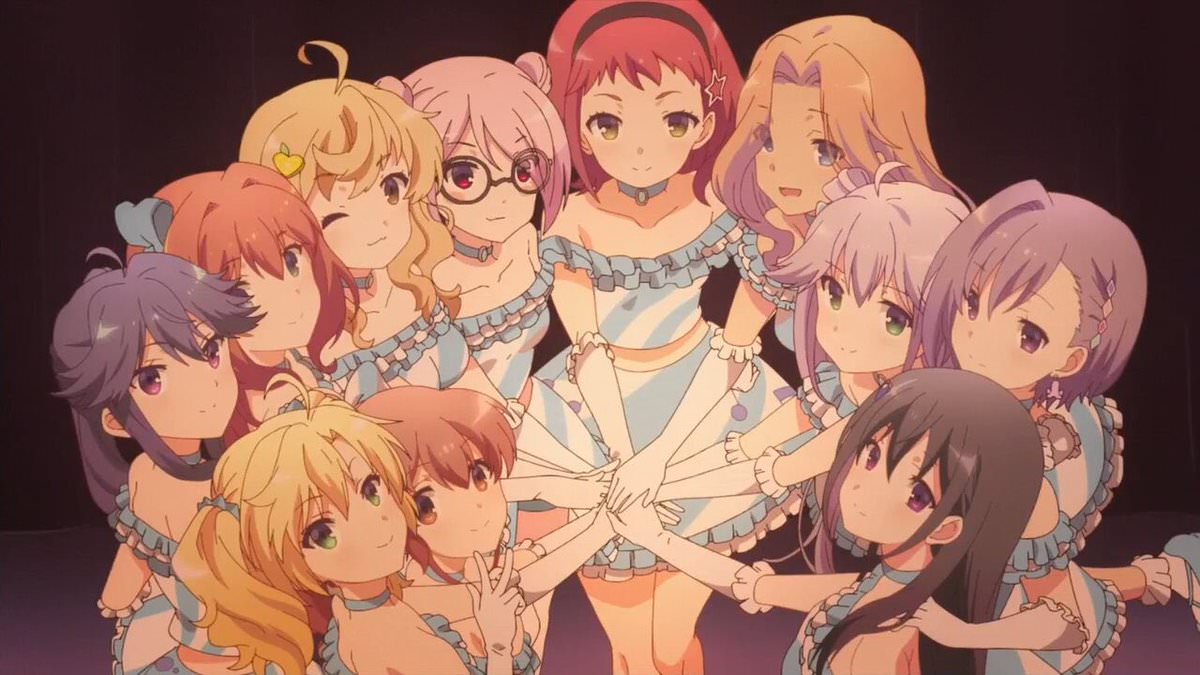