Slow Start? That name seems familiar… I reviewed the ~noteworthy~ 7th episode of it for my blog in the Winter 2018 season.

Oh yeah! The ‘cute girls doing cute things’ show that had an episode that upped the ante on a teacher x student relationship. Way to jump the gun and alienate anyone looking for a review that’s representative of the show as a whole and not just a single side-plot.

Okay, fine. What’s the show about then? It’s about Hana Ichinose, a shy and nervous first year high-schooler with a secret… she’s actually a year older than everyone else because she had a gap year due to an illness. It might not seem like a big deal, but to Hana it is, in fact it’s the thing she worries about most—well that and making friends and not seeming too boring and living alone and…

Okay I get it, she’s a neurotic girl! I wouldn’t say “neurotic” more skittish and worrisome, she’s constantly assessing herself and her actions in the unfounded fear that her newfound friends at her new school will judge her harshly for them, despite her percieved flaws being minor—almost non-existent to an outsider viewing them.

Right, and who are her ‘new’ friends? Well there’s the gentle and confident Eiko Tokura, who’s the most popular girl in their class. Always clinging to Eiko is the adorable Kamuri—who, despite her looks—is in fact a high-school student too, she’s obsessed with three things; food, sleep and Eiko. Lastly is Tama-chan, an energetic and easy-going girl who sometimes gets into trouble.

Uh-huh, and so being a ‘cute girls doing cute things’ show I imagine one’s mileage on this show is dependent on how much they like these characters? You’re learning… that’s kind of scary…

Well I was bound to pick something up from your incessant ravings about ‘cute girls’. Heh, well yes, what you said is accurate, there is very little plot here even by ‘CGDCT’ show standards. So unless you’re immediately enamoured with at least one of the four main characters you’re unlikely to find a lot to gravitate toward.

And I’m guessing you were “enamoured” with one or more of these characters? Pretty much all of them from the first episode, and that just snowballed as side characters of equal adorableness were introduced.

Oh? Like who? Well there’s Hana’s adult cousin Shion, the busty landlady of the apartment complex Hana is currently calling home. I love the fact that she’s so doting on Hana to the point that friendly ‘rumours’ about her and Hana “dating” arise amongst their group. Also in the apartment complex is Hannen-san, a beautiful shut-in who rivals Hana for the amount of neurosis’ she has, and a number of them a lot more relatable—at least to this reviewer.

You’ve deliberately left one to last, haven’t you? Obviously. Since you went and ~blurted~ it out at the start of the review… Enami sensei is their homeroom teacher, a snarky and apathetic young woman who the ever-flirty Eiko takes a liking to.

…More than a liking, isn’t it? Yes, it’s true, the relationship between Eiko and Enami is something I found astoundingly beautiful and nuanced and fascinating even if it falls into that massively questionable void of ‘Teacher x Student’. The thing that I think this show does so right where other relationships of this nature might do wrong is that I never get the sense that the fact that Enami is her teacher has anything to do with their attraction to one-another. This isn’t a person in a position of power and authority taking advantage of someone weaker and inexperienced. Eiko frequently flirts with older women that she finds attractive and interesting and while flirting is not consent, Eiko is never put in a position where she’s being taken advantage of— 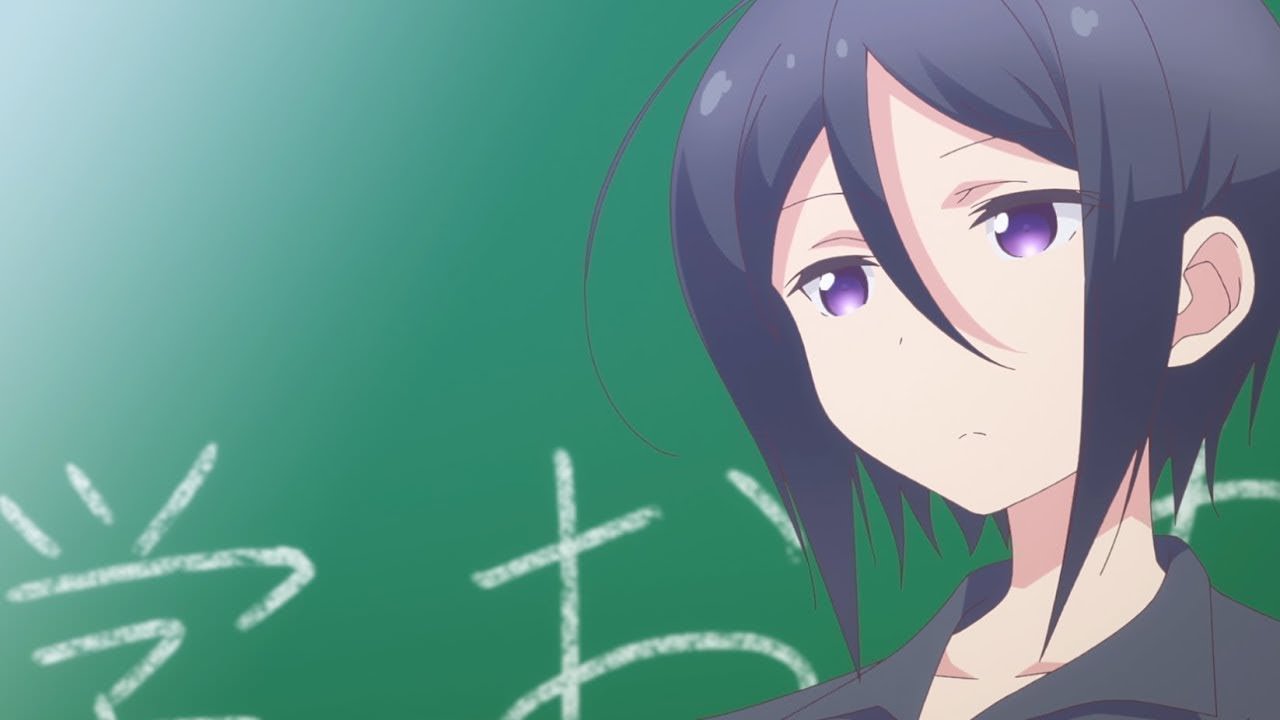 —Not even when she wakes up with her hands bound in the teacher’s apartment? Well if you’re going to word it like that of course it’s going to sound lascivious! I’m not going to go over points I explored in depth in my 1000+ word review of the episode, just suffice to say both teacher and student were surprised by the power each other had over one another and that “power” didn’t come from one’s job or the other’s flirting but the feelings that burgeoned between them in this unexpected situation.

So that all happened in episode 7 of the 12 episodes. Does their relationship progress any further after that? Not ever in such a concentrated way as that. But there are a few brief subplots that arise later. Such as in episode 11 at the Summer Festival there’s a pretty intense flirt/finger suck that had me reaching for the rewind button, just to be sure I’d seen what I’d seen. And episode 12 had a cute moment amount sharing a piece of candy that’s not nearly as salacious but italicised in a kind of sadness that suggests at how hard it must be for both of them to carry on this kind of ‘forbidden’ relationship.

Uh-huh, and aside from the whole teacher/student thing, how are same-sex relationships treated in this show? I’m glad you asked! It’s almost like I wrote this question for you! Ahem. Anyway, I don’t think I’ve ever seen an anime normalise lesbianism this much and it’s so damn refreshing. Yes, it’s pretty chaste, but it never seems to be much of an issue for anyone (other than very infrequently Hana), in fact one of my favourite recurring couples is Tama’s grandmothers, who are her sole guardians and are very much a couple. This isn’t just two women who raise Tama, they live together and act like partners do and no-one so much as bats an eye, nor even raises attention to it—it’s the most normal thing in the world and I love this show so much for it.

But this isn’t a yuri series, is it? Well, no, it’s not. But that doesn’t mean it can’t have yuri-adjacent themes. I’m about 99% sure the mangaka is herself a female of the LGBT community and so it’s only natural and very appreciated that she’s put a lot of her own self into this series. I could be projecting but I’m pretty sure the teacher character is at least semi-autobiographical, at least that’s the way it feels.

At the start of this review you said I “jumped the gun” for talking about the teacher/student relationship because it wasn’t ‘representative’ of the show as a whole, but hear you’ve gone and talked about that very point for nearly half the review! Ah, err… well, it’s only because it is the thing about the show that warrants the most discussion. Yes, I love this show, even when it is something as seemingly low-key as shopping or swimming or cooking but that doesn’t make for a particular ~riveting~ review. Frequent readers already know I’m all about the slice of life shows so I have to talk about something to keep their interest up.

Fair enough. So was there anything else you wanted to mention before we wrap up the review? Just that I think this show deserves more attention for being completely adorable and a lot deeper than some people give it credit for, yes it’s not going to change people’s opinions on the genre but likewise I think it’s worthy of more than just a passing cursory glance.

Yeah, that’ll work… Listen, convincing people to watch slice of life show’s is hard enough at the best of times.

Final score and recommendation? Sadly, I think this show will be forgotten, at least in the West. But if you have even a passing interest in this genre I think there’s a lot to this series that’s lying just beneath the surface. It makes me want to read the manga, which I can’t say I’ve ever really had the desire to do so for any slice of life/cute girl series before, which probably says something—even if I’m not sure what exactly. It might be slow to start but I never want it to finish; 92 out of 100.