Huh? Sounds pretentious… I know, I had to look it up. ‘Asterism’ means a prominent group or pattern of stars not quite as big as a constellation.

Oh, so only two of the girls are gay? Well, at the moment. And although the manga—in typical Japan style—doesn’t really acknowledge bisexuality, and argument could be that Tsukasa might be bisexual…

Wait, but isn’t Tsukasa the one who’s in love with a girl? Yes, but she gets asked out by a super handsome boy from another school, and while being very wary about the whole thing since she’s never really dated anyone, she still goes out with him. Though it’s more peer pressure to do so than anything else so I could be wrong, I just didn’t want to discount bisexuality as a possibility!

“Normal”? Yeah once again—in typical Japan style—anything that’s not heteronormative is instantly labelled as being “not normal”, there’s the usual ‘but I can’t love her, we’re both girls’ shtick that’s as tiresome as it is problematic. But these are genuine thoughts that girls and boys have while growing up in any country, not just Japan, so they’re not invalid it’s just a shame teenagers (and adults even) have to even have this conflicted internal dialogue about their sexuality.

So there’s a boy involved too now? Not really a love ‘triangle’ now is it? I guess not. Also protagonist Tsukasa has an identical twin brother named Subara who likes to cross dress in Tsukasa’s clothes and wear a wig and when he does so looks exactly like her.

Uh… okay. And he tries to break up Tsukasa and Kyousuke (the new handsome boy), which I don’t know if I’m just projecting here but seems to me like he might have a bit of a sister complex going on here…

Oh dear. As I said, I’m just ~reading between the lines~ again, I could be wrong!

So what actually happens in the first volume? Uh, not a lot actually! It’s predominantly a slice of life format manga, just with the romance put on top. The 3 girls do ‘best friend’ things like talk in class and goof around and go out places, you know the usual. All the while occasionally cutting to inner-monologues form either Tsukasa about how much she loves Nadeshiko and wishes she could say something to her and Nadeshiko thinking about how much she loves Mikage.

Sounds a bit dull. I wouldn’t say it’s dull, it’s a bit repetitive but they mix it up a bit because Nadeshiko has actually admitted to Tsukasa that she loves Mikage and so there’s the added drama/anguish of poor Nadeshiko having to listen to the girl she loves talking about how much she’s in love with someone else (and a girl at that)!

Well that at least carries a bit of dramatic weight. Plus Tsukasa’s mostly afraid of telling Nadeshiko how she feels because she values the friendship the three of them have and is worried any kind of love confession will destroy that.

All right, I can see how this is a bit more interesting than you previous led on. Hey! Are you criticising my ability to plot summarise!

More or less. What are the characters like? I really like Tsukasa, I’m so glad they’ve written her and drawn her the way she is. Like she’s obviously a pretty girl, but they aren’t afraid to make her look borderline Tomoko from Watamote on occasion. And while it is a total cliche to make a lesbian character tomboy-ish and into sports, I don’t think it’s too obnoxious here. Nadeshiko has some interesting character traits, and she’s very tall, but otherwise not much to go on. Mikage’s ~enthusiasm~ wears a bit thin but I do like how blunt she can be when talking to Tsukasa about her love life—or lack thereof.

Wait! Did you say these were “middle-schoolers”?! Um… yeah, like 12 questions ago, bit slow on the up-take there aren’t you?

So a lesbian manga about “middle-school” girls? Are we going to have a repeat of our Yuru Yuri argument? Listen, there’s nothing the least bit sexualised about this manga, there’s not as much as a single kiss the entire volume. And there’s absolutely nothing fetishistic about young women trying to work out their complicated feelings at an emotionally and hormonally charged time in their lives.

But are middle-school girls really thinking about this kind of stuff? I don’t know! I’m not a Japanese middle-school girl questioning her sexuality, and neither are you! You can’t compare yourself at this age to how people are now, kids grow up a lot quicker and experience things a lot sooner than we were in school!

And why exactly is it called ‘Nameless Asterism’? I mean you told me what an Asterism was but I still don’t get it. I guess one way to look at it is these girls are a small constellation of bright and shining stars in their own right, but amongst a sky full of likewise asterism’s they’re not particularly important, hence the nameless part.

Hmm, kinda poetic when you put it like that. Final score and recommendation? There’s nothing especially remarkable about this series, but that’s kind of why it’s so endearing. Sure there’s secrets being kept and emotions being wrought and complications to be had, but I don’t get the feeling this manga thinks it’s anything deep or profound regardless of its pretentious title. It’s just telling a story about teenagers that’s packed with angst and humour and pointlessness like a lot of early teenage years. I’m not fervently waiting for Volume 2 but I’m still curious where the story will go and will gladly spend time with these characters again. Not the brightest star in the sky, but pretty nonetheless; 77 out of 100. 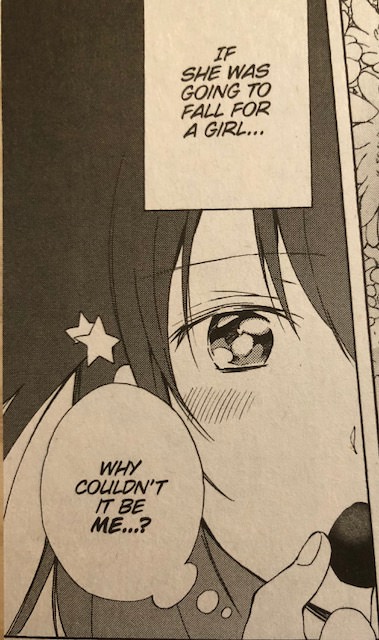