***WARNING – the following review contains sexual references that may offend***

And what’s it about? Boobs! Just boobs, just great big boobs all up in your face—

If you’re not going to take this seriously, I’ll leave. No more mentioning of “boobs”, okay? Guh, fine…

So who’s this manga written by, someone famous in the manga world if my notes are correct? You have notes?! Oh and yes, it’s written by Coolkyousinnjya (Coolkyoushinja/Cool-Kyou Shinsha??).

Uh-huh. And it won a bunch of ‘Anime Awards’ too didn’t it? Yes, but nobody cares about that— 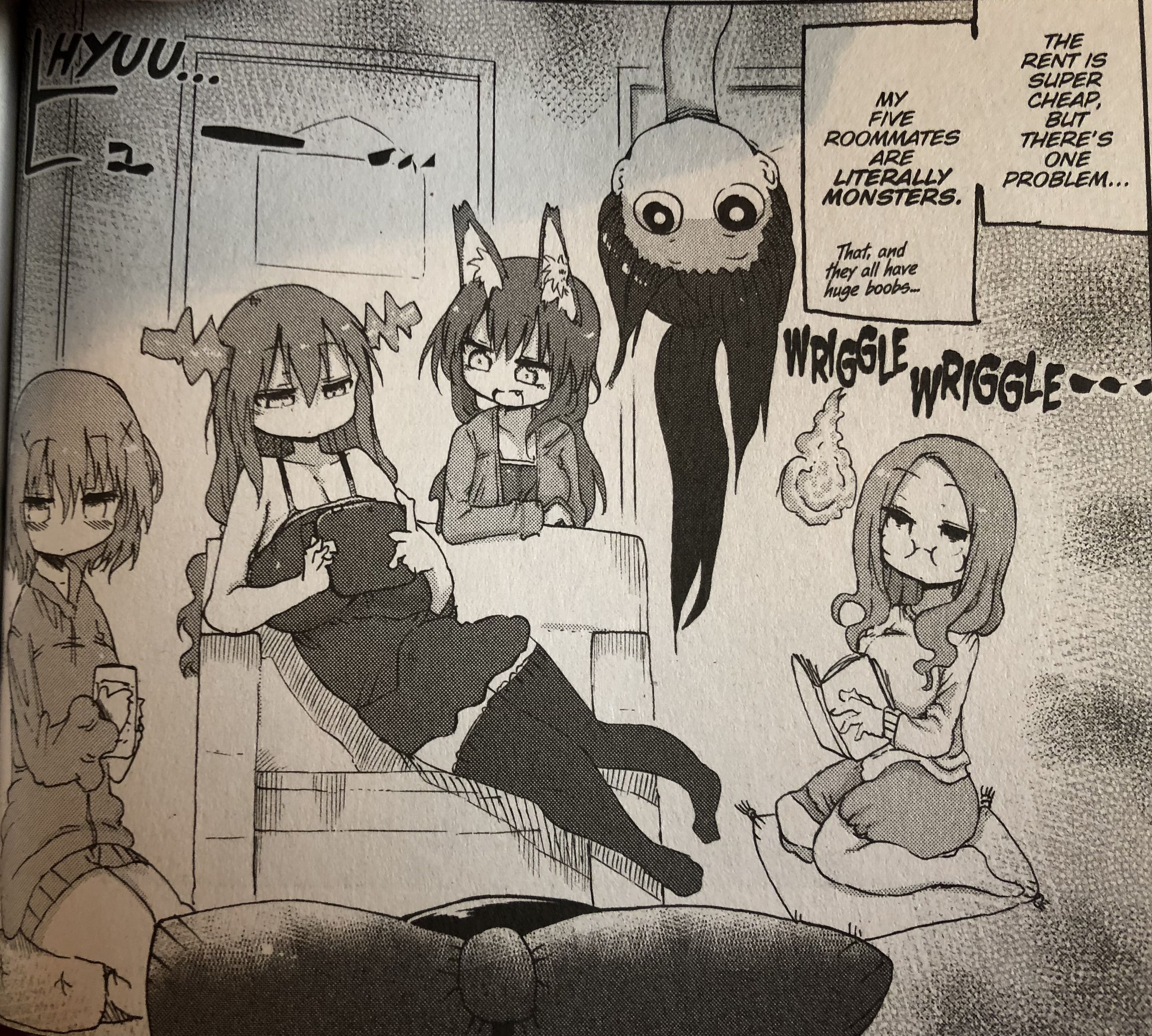 —Fine then! With that all out of the way, what’s the manga actually about? Breasts, anime tiddies, sweater melons, nice oppai.

What did I say?! You said “no more mentioning boobs,” I didn’t mention “boobs”.

Why are you like this? I’m just trying to contribute to an accurate review of this manga… As am I, if you don’t believe me then just read the author’s afterword at the end of volume one!

Too many panels to read! Summarise it for me! Inundated with work offers after the runaway success of Miss Kobayashi’s Dragon Maid, author and artist Coolkyoushinja turns down many high profile but potentially high stress offers to do ‘legitimate’ work with large publishers until he’s offered a niche pitch about ‘big breasted monster girls just hanging out in lounge wear with a flat chested human roommate’ and suddenly he’s inspired to write again!

Ugh, he sounds like more of a pervert than you… Now now, let’s not say things we can’t take back!

So what am I supposed to do with this information? I’m still trying to figure out what this manga is about? Here’s the deal, I could have just copy/pasted the ‘official’ synopsis from the web, spun some creative licence with regard to the content, but I wanted to be as honest with this as possible because, even though I know it’s unlikely someone would go out and buy something just because I said something positive about it I wanted to make sure that those who were inclined to do so knew exactly what they were getting into when it came to this manga. The publisher’s can write ‘From the creator of Miss Kobayashi’s Dragon Maid’ all they like; it doesn’t change the fact that is for a different audience then the wide(r) appeal of that aforementioned title.

In what way exactly? Well in case it wasn’t abundantly obvious this is a much more adult title than you might be expecting, this isn’t “cute and wholesome with a touch of naughtiness” like Miss Kobayashi’s Dragon Maid, this is the author’s fetishes put to paper, within the first half dozen pages we’re introduced to one of the main character’s monster roommates, a promiscuous fox girl whose idea of ‘cleaning up after herself’ is licking the semen out from condoms from her having sex with men.

Wh—what?! And I’m all for it! Fucking get bawdy and lewd and liberated up in here please, too often Japanese manga falls into the same tired tropes to the point you can pretty much guess what’s coming before it comes (no pun intended) but at least here it’s the kind of unfiltered debauchery that’s usually reserved for fan fiction!

That still doesn’t sound like a good thing. And that’s why I’m warning you, for some—nay—for a lot of people this will be “disgusting” and “perverse” and “unnecessary” but for some of us, this is exactly the kind of subversive and honest content we’re wanting, even if it is just the author airing his fetishes to the world.

I’m almost afraid to ask, but what other fetishes are we talking about? Breast milk.

O-kay! So um, is it too late to ask about the characters? Well technically yes, we’re nearly at the end of this review, but since you’ve put up with this I’ll entertain the notion. So first there’s our protagonist, Yata, a normal human high-school girl whose main hang-ups are her ‘angry eyes’ and flat chest. Then there’s Momi an Oni (horned ogre) with massive oppai who’s a bit of a shut-in. There’s Mizuchi who’s a Kappa (still not sure even after Googling) and kind of the mother of the house, if only for her cleaning and how scary she can be. There’s Youko, the previous mentioned promiscuous fox spirit. And Kuro who is a Rokurokubi (I think that’s like a Yokai, she seems similar to the main girl in Yokai Girls) whose main ‘feature’ is her ability to stretch her neck, also she fancies herself as a bit of a comedian. And last but not least is Yuki, a snow woman (yes like from Interviews With Monster Girls) who falls madly in love with our protagonist and is also very forgetful about her powers.

Seems like there’s a lot to this book when you lay it out like that! Yeah… except it’s kinda just all about boobs and fetishes and being lewd in a familiar slice of life format.